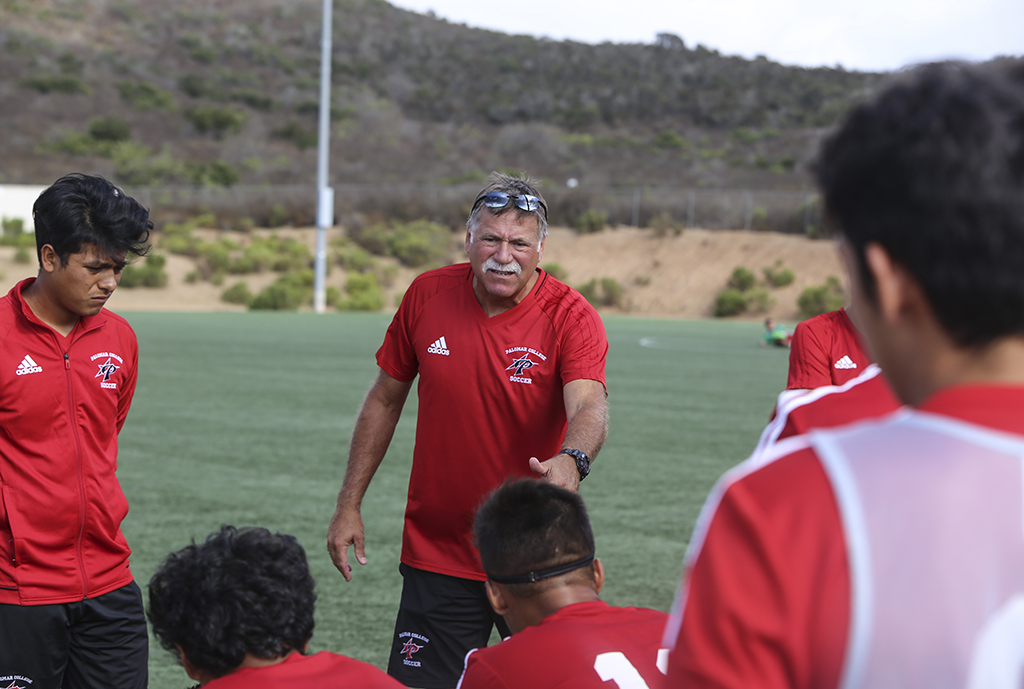 For the Comets, the New ‘Spring Ball’ is Soccer

Published December 7, 2020 by Parker Meister
Palomar’s men’s and women’s soccer squads are rearing to go after having their initial Fall 2020 season pushed back to Spring 2021, and are doing everything to keep the season on track.

Due to COVID-19, the fall soccer season was pushed to spring for the Palomar Comets. In hopes that the newly-appointed spring season stays, Palomar’s players and coaches have been taking the necessary extra precautions to help keep their playing hopes alive.

With the season openers for both men’s and women’s soccer scheduled to start Monday, Jan. 4, 2021, players are roughly a month away from finally being able to compete.

Palomar Men’s Soccer coach, David Linenberger, mentioned in an interview that “no one has pulled out of the conference.” Including Palomar, there are seven teams in the Pacific Coast Athletic Conference.

“School is closed and classes are online, which means all our training is from Zoom almost like virtual one-on-one training sessions,” Linenberger said.

He finds it very ironic that Palomar is continuing to keep players separated to avoid spreading the virus. Other colleges are allowing their teams to practice as a whole, such as MiraCosta, which is 15 minutes away and the closest community college to Palomar’s main campus.

For the women’s team, Palomar is looking for a replacement head coach due to the resignation of the original head coach two months ago.

As a result, not much has been mentioned about what will happen to the women’s team if Palomar fails to find a new head coach. There is also uncertainty on exactly how many women’s players will be returning this upcoming season.

The men’s team hopes to do better this year after last season’s debacle, falling just short of an equal ratio of wins to losses. Last season the Comets averaged roughly 1.95 goals a game and allowed 1.62 goals a game, with their shot percentage sitting at only 2.929%.

Returning players know what to expect coming into the new season, but the issue relies on if they will be able to sync with each other due to having to practice individually.

Returning players had different outlooks on how they were coping with COVID-19 induced training sessions.

When asked how they felt about individual training, Center Midfielder Robbie Jeffers was quick to say, “It is terrible, there is no opportunity to critique certain skills a player needs like on one challenge.”

He added, “Most of our training is film analysis instead of hands-on. I get it because of the virus going on, it is just frustrating.”

Left-Wing John Bernal saw it in a different light.

“I just focus on what I can do in regards to my touch and your skills, not being able to do high-level training is a bummer,” said Bernal. “This is a time where you as a player have to make your own decision. Do I want to be the same level or do I actually want to get better?”

To stay up to date with Palomar’s men’s and women’s soccer, follow Palomar Athletics on Twitter or its webpage under the sports tab. You will see the soccer option where you can view the rosters and match dates and times.