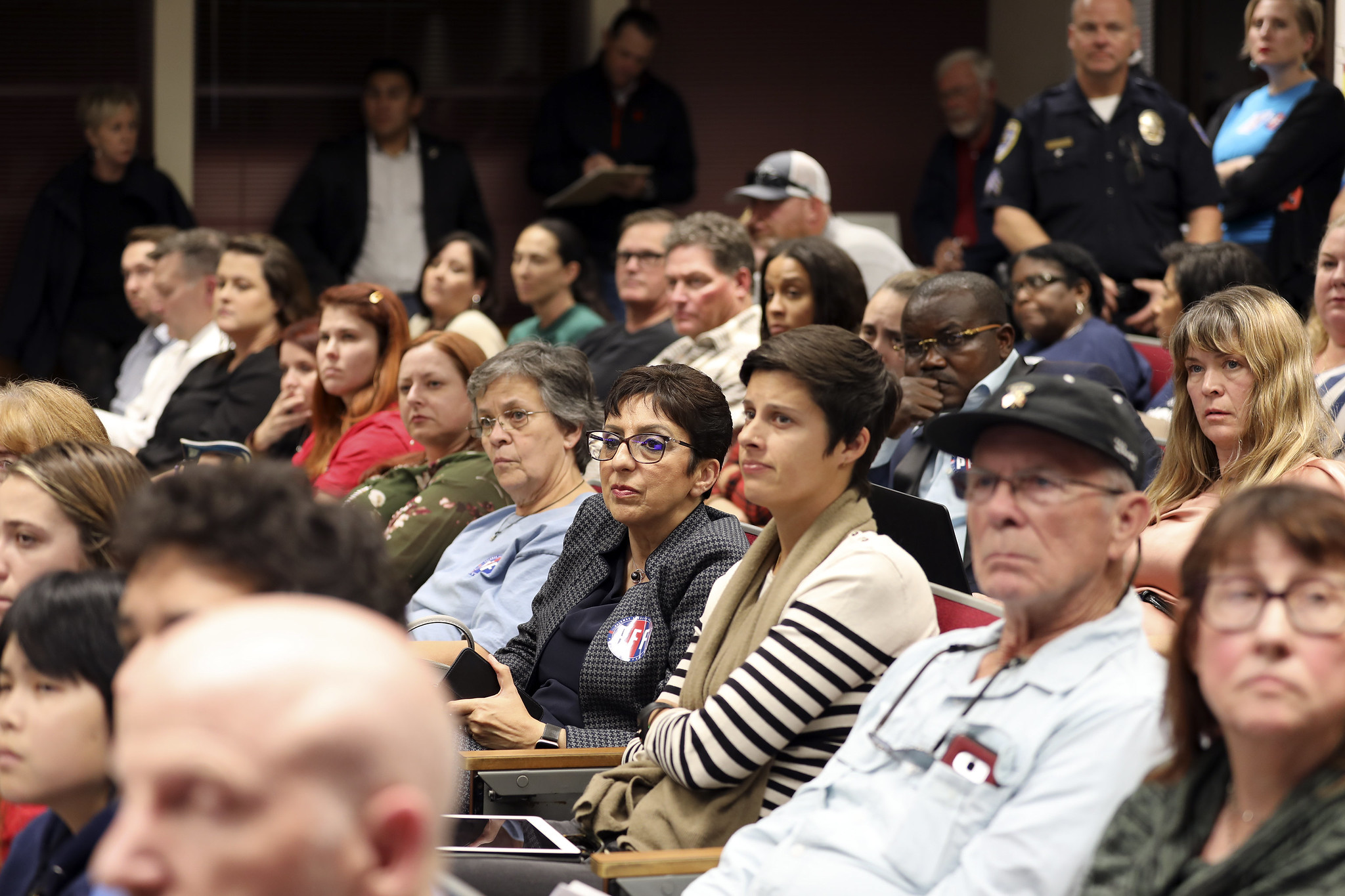 Palomar faculty members presented an official resolution calling for the president’s resignation after which a report revealed that the district is in a serious financial crisis.

Over 90 community members gathered in the small board meeting room on Tuesday night, and others were instructed to stay outside SSC-1 as a result of reaching maximum capacity.

The meeting lasted for four hours due to ongoing discussions regarding President Joi Lin Blake’s leadership and the district’s $12 million financial deficit.

Fifteen members of the community took to public comment to share their concerns about campus climate issues as well as to request new initiatives.

A recent financial report revealed that the Palomar district is in a $12 million deficit and is at a high risk of entering fiscal insolvency.

A Fiscal Crisis and Management Assistance (FMCAT) report was completed to give an overview of Palomar’s current financial issues.

If the district continues to practice similar spending habits, Palomar will “consume 100% of the unrestricted general fund revenues in three years,” according to the report.

As a result, Palomar would be “forced to borrow $6.5 million from an external source to remain solvent (debt-free).”

Michelle Giacomini, a FMCAT representative, presented the report during the board meeting.

Giacomini provided recommendations on how the district can reach financial stability. She shared that she did not predict Palomar would receive a high risk ranking, but the report indicated otherwise.

Districts who are considered high risk for fiscal insolvency receive 40 percent or higher on the report.

“You definitely have a spending problem at Palomar College,” Giacomini said.

As a resolution to the $12 million deficit reported, Giacomini recommended that the board take salaries and benefits for campus employees into serious consideration.

At the current spending rate, nearly 96.2 percent of Palomar’s expenditures are spent on salaries and benefits. Giacomini said Palomar should try to get that number under 90 percent to decrease their risk of insolvency.

During her response to the call for her resignation, President Blake said that she will be taking action to resolve the budget issues.

“The board has directed me to stabilize the budget and the institution,” Blake said. “As I’ve shared on many occasions and on many forums, it’s not that I’m a hard person, or that my team’s a hard person, we’re just in a hard place.”

Blake then went on to say that employees at Palomar has “one of the richest health and welfare packages in the State of California for employees.”

“Whether I’m here or not, we have a $12 million deficit, that doesn’t change,” Blake said. “Action has to be taken immediately.”

Trustee Nina Deerfield responded to the recommendation of cuts to salaries and employee benefits.

“I feel like cuts and fiscal responsibility should start at the top and not at the bottom, which is what it feels like we’re doing,” Deerfield said, receiving applause from attendees present at the meeting.

The resolution called for board members to “thoughtfully but expeditiously” remove President Blake and to find an interim dean until the position is permanently filled.

This is the Resolution Final Draft that was presented.

Anel Gonzales, President of the Council of Classified Employees (CCE), reported that classified employees also do not have confidence in Blake’s leadership.

“Over the past three years, Dr. Blake has engaged in numerous management practices that have negatively impacted staff, students and the community,” Gonzales said. “As a result, the CCE does not have confidence in Dr. Joi Lin Blake.”

President Blake responded to the vote during her report, saying that as a former faculty senate president, she understood why faculty members decided that they have no confidence in her leadership.

“I understand why you don’t have confidence in my leadership,” she said. “Because, you know what, I would be derelict in my responsibilities as CEO of this college if I continue the practices that we have engaged in over the last decade.”

“I am unapologetic for the decisions I have made,” Blake continued. “I have done what is best for this campus, for our students and this community.”

Trustees Norma Miyamoto and Nina Deerfield also responded to the resolution, requesting that the board should discuss the vote of no confidence in more depth during closed session.

“The Senate’s vote of no confidence also must be addressed by the board,” Miyamoto said. “No one likes discord less than I do, but the board is obligated to discuss Dr. Blake’s performance.”

Trustee Nancy Ann Hensch interrupted Miyamoto’s report that the evaluation of the Superintendent’s performance “has been discussed extensively in closed session.”

Hensch then cited board policy 2315, which says that discussions made in closed session are confidential and should not be discussed in open session.

Miyamoto asked to continue, saying that she is only requesting that Blake’s performance be a matter of discussion in future closed sessions. She then completed her report by citing examples of promises made by Blake in previous meetings that she has not followed up on.

Hensch interrupted Miyamoto again, saying that her comments could be assumed to be an evaluation of Blake.

“I’m not placing all the blame on Dr. Blake,” Miyamoto clarified. “We as trustees ask for different information that members of the public come and share and then nothing happens.”

Miyamoto concluded her report by requesting that the secretary of the board keep note of request made by the public and to determine how and when the information will be provided.

Deerfield chose to reserve her comments until after the other reports were made. Trustee Mark Evilsizer did not comment on the vote results, but said that he is open to meet with constituents. Trustee John Halcón was absent.

“I’m heavy hearted to say that I want to get this on the agenda to talk about the resolution as a board,” Trustee Nina Deerfield said. “I think we have enough feeling on this campus to move forward with the resolution.”

Deerfield continued on to say that she’s heard that Blake’s leadership is “abusive” from previous employees who have left the district. Trustee Hensch warned Deerfield that those remarks should only be made during closed session.

“Any evaluative statements about the Superintendent/President need to be discussed in closed session,” Hensch said.

Update: “It disturbs me deeply that there’s not enough listening energy,” said Trustee Nina Deerfield, calling for the board to discuss the resolution presented by Thompson. @telescopenews pic.twitter.com/oxw8N316UA

Blake also responded, saying that the district is willing to discuss “the reasons those individuals separated from the district.”

“I think there’s an overwhelming cry here for help from everyone that works here,” Deerfield concluded. “I think it’s a board obligation to listen to the many, and that’s all I’m going to say tonight.”

Connie Pennington, a sixth-year Palomar student, took to public comment to voice her concerns about the current fiscal crisis.

“I am very angry and outraged at the way finances are being spent here at the school,” Pennington said.

Pennington went on to further call out specific spending choices the board has approved.

“How dare you waste money on robots that sit in closets,” she said. “Offices in the library that weren’t originally planned to be there? A million dollars? This is ridiculous.”

Pennington called for the board to make better financial decisions in the future, saying that board members should feel ashamed of how money is being spent at Palomar. She went on to say that the faculty and board members cannot exist without Palomar students.

“It’s gotten to where the students hear about all of you and all of your decisions,” Pennington concluded. “It’s making an impact on us, negatively.”

Jon Walker, a student representative from Palomar’s Associated Student Government, requested that the board change their meeting room to accommodate for larger crowds.

Walker said that students should be able to get involved with their local government, especially when decisions made by the board directly affect them.

“If students need their voices heard the meeting location is crucial to that,” Walker said.

Walker continued, saying that live streaming the meetings will only increase meeting accessibility, but that it would not provide encouragement to students to speak during public comment.

“I represent the ASG Board and we would like to formally request a change in the meeting location of the Governing Board which can better accommodate the body of attendees,” Walker concluded.