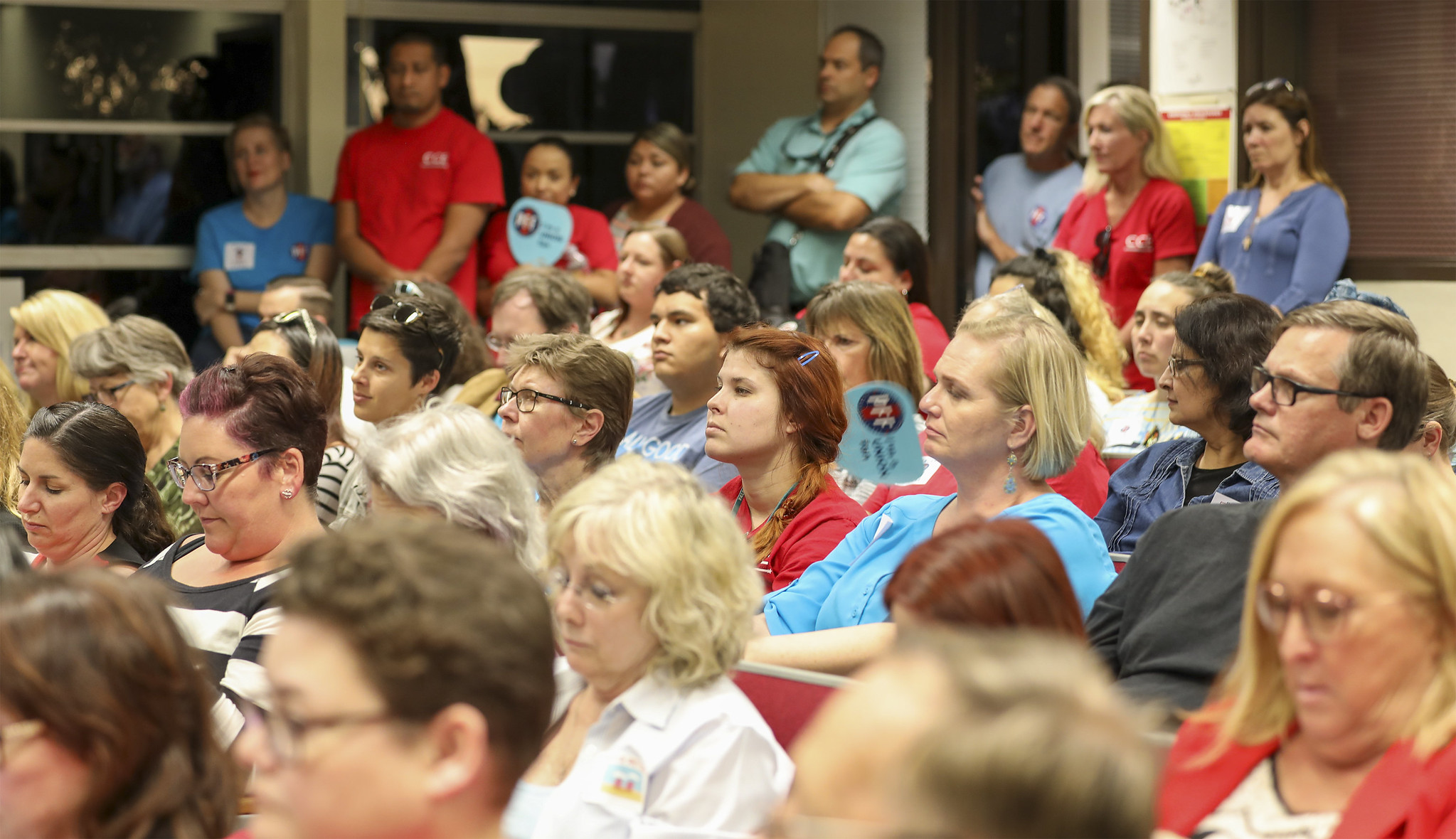 Governing Board Overview for Oct. 8 meeting

Faculty and administration members gathered in SSC-1 for the Governing Board meeting on Oct. 8. Here are some highlights from the meeting.

Multiple faculty members arrived with signs that said, “We are here! Hear us!” and “Let Us In!” They displayed multiple signs from outside on the room’s windows and along the inside of the board meeting room.

Attendees who could not find a seat in the room were required to stand outside due to reaching the maximum capacity required for safety precautions.

Before the meeting, Teresa Laughlin and Anel Gonzalez formally requested that the board trustees postpone the decision to renew President/Superintendent Joi Lin Blake’s contract.

According to the official renewal document, Blake’s cost-of-living adjustment (COLA) would increase by 3.26 percent when approved. Gonzalez wrote in an email to board trustees that “organizations do not increase the pay of their leaders when an organization is facing a fiscal crunch.”

During the meeting, trustee Nina Deerfield and student trustee Linus Smith spoke about their disapproval of renewing the contract with the COLA increase. Smith and Deerfield mentioned that the District’s current financial crisis was a reason for dissenting.

“I think it would be appropriate if we led by example in terms of taking cuts together as opposed to taking cuts to departments,” Smith said.

Trustee Hensch asked Smith to clarify if his suggestion would be implemented for all contracts or specifically for the President/Superintendent. Smith responded, saying that the policy should be implemented across all departments.

“COLA for the President/Superintendent versus COLA for classified staff is a very different amount of money,” trustee Deerfield said. “That’s why I think top-down leadership would do this differently.”

The renewal of Blake’s contract was approved with a 3-1 vote. Deerfield voted against the motion, and Smith gave a similar advisory vote.

After the meeting, Laughlin responded to the decision that was made.

“She already has an inequitable and lucrative contract,” Laughlin said. “I think that Linus Smith also pointed out it’s $9,500, which would be three part-time faculty members’ health benefits. So, it’s already inequitable.”

Gonzalez also responded to the vote during her report to the board.

“We are disappointed that, despite our requests, the board moved J3 [ the contract renewal] forward,” Gonzalez said. “Trustee Evilsizer’s comment about being equitable with the COLA is misgiving due to the fact that you approved lifetime benefits for Dr. Blake which is something that no other employee receives here. If you want to be equitable, we are all open to lifetime benefits.”

Board trustees arrived one hour late

The meeting officially started at 6:20 p.m., nearly an hour later than open session is scheduled to start at 5:30 p.m. During public comment reports, some faculty members mentioned their dissatisfaction with this.

“You would’ve seen more than 100 faculty and staff that came and participated in this board meeting,” Laughlin said during public comment. “We waited, but some people had to teach class.”

Other faculty members left before the meeting started, being that they had classes to teach. Student trustee Linus Smith also mentioned the tardiness.

“I hope that it was an extraordinary circumstance why we started an hour and twenty minutes late for the meeting,” Smith said. “But it strikes me as being slightly disrespectful to all the people here who had to wait that amount of time.”

Smith requested that if the board is not dealing with an extreme circumstance in closed session, that trustees call the meeting in-session at the scheduled time.

President Blake responded to Smith’s comments, saying “we will take that under consideration.”

At the beginning of the Governing Board meeting, board trustee Mark Evilsizer called for a new election of officers for the remainder of 2019. Evilsizer decided to step down from his role as board president.

Nancy Ann Hensch called for nominations to take the role of board president and was unanimously voted for the position. Hensch nominated Evilsizer for the board secretary position.

Evilsizer was elected for the position in a 3-1 vote. Trustees John Halcón, Evilsizer and Hensch voted in favor of the nomination while trustee Deerfield voted against the decision.

Before the positions were appointed, Evilsizer noted multiple reasons why he decided to step down from the presidential position, saying that the District is facing “severe financial difficulties” and “civil rights challenges.”

“We are in fact having trouble accepting our need for diversity,” Evilsizer said. “We do not need to be known as ‘Mississippi with palm trees’.”

“Trustee Evilsizer, I like you a lot. You’re smart, you’re fair, you’ve always been genuine, but that comment,” Lawson said. “That rhetoric is divisive and it alienates your allies. To juxtapose the history of Mississippi to what’s happening here at Palomar College right now is problematic.”

Gonzalez also responded to Evilsizer’s remark during her report to the board.

“As a woman of color, I find trustee Evilsizer’s comment… incredibly insulting,” Gonzalez said. “As a matter of fact, using perceived bigotry as an excuse to not take accountability is alarming.”

The building was recognized by The Kansas American Institute of Architects for its sustainability as well as its “elegant detailing.” The building received this award from a Kansas institute sue to the project architect headquarters being located in Kansas City.

The building also received the Malone Grand Orchid award for “thoughtful design” in aesthetics and practicality.

According to Astl, the M&O building has now received eight awards in total.