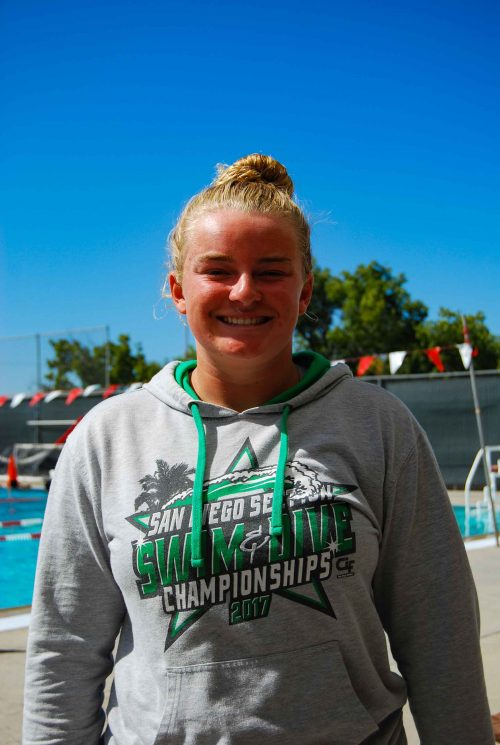 A sophomore at Palomar College, 19-year-old Balch has been playing water polo for six years.

“I was a swimmer for a club team in Oceanside, and one of the lifeguards told me that I should try out for water polo,” Balch said about her introduction to the sport. The water polo coach for Oceanside High School was also her swim coach, so the transition was seamless.

Mandy Simon, Palomar Women’s Water Polo head coach, said Balch is a “phenomenal” swimmer and that her talent carried over into water polo. She added that swimming skills do not always translate to water polo, but that Balch has been able to bridge the two sports well.

As one of the three veterans on the team, Simon expressed her desire for Balch to lead by example in and out of the water and to “step into the leadership role” this season.

She mentioned that Balch takes initiative to help the less experienced players, while leading the team in warmups and setting up the pool for practice.

Teammate and fellow sophomore Sophie White also praised her comrade’s leadership skills, saying that she knows how to take control of a practice and is a very hard worker.

“Even off the team she’s really responsible,” White said, “She’s a really good friend, too. She will help you out with anything you need.”

Outside of water polo, Balch works as a lifeguard in Oceanside and recently landed her first coaching job as the JV coach for Oceanside High School’s girls’ water polo team.

When asked how she juggles everything, Balch explained that she sticks to a schedule.

“I don’t really have much of a social life,” she said with a laugh, “It’s school, sports, work, and then I go home and sleep for as long as I can.”

In her free time, she enjoys reading, drawing, and going to the beach. She described her overall life as “very water-oriented.”

Balch’s goal for the future is to transfer to UCSD and join their competitive swim or club swim team. As for water polo, she doesn’t believe she’ll have time to compete on an upper level but said she would play for their club team.

Her major is undecided, however she’s leaning toward obtaining an English degree. She said she may also consider majoring in kinesiology so she could further pursue coaching water polo.

Balch’s current objective is for the team to make it as far in the conference tournament as last season.

“We made it to the finals and we got second, we lost one point by one point,” she said, “So hopefully we’ll make it that far again.”