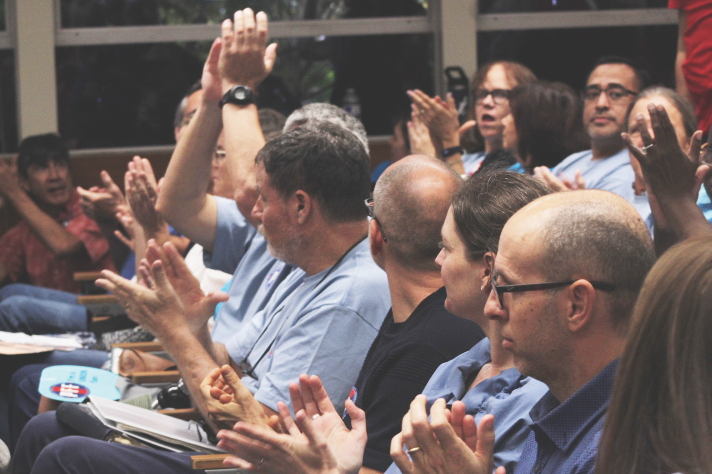 At the Sept. 10 Governing Board meeting, Beth Pearson, a biology professor at Palomar, talked about her experience with the new efforts pushing for diversity when hiring faculty candidates during public comment.

Pearson claimed that the Biology department takes hiring candidates seriously, and said, “It takes a certain kind of person to deliver that material in a clear and organized way, and in a manner that empowers students.”

Pearson continued, saying that in recent hiring processes, the Biology department selected top-tier candidates in the applicant pool. When second-level hiring decisions were being discussed, Pearson said that the applicants were dismissed, citing that the candidates weren’t diverse enough.

She said that when they asked for explanations as to why the candidates were rejected, they received no answer or solutions.

“We spend an enormous amount of hours collectively developing screening materials and then pouring through applications and cover letters to find faculty that understand our students,” Pearson said. “We found the best of the best of our applicant pool, only to arrive at second level discussion where only one voice was heard, and where only one person’s perspective was counted.”

Discussions regarding faculty and campus diversity escalated at the Dec. 11, 2019 Governing Board meeting, where Tracy Johnston, a compliance officer, expressed her concerns regarding remarks that President/Superintendent Joi Lin Blake made in regards to pushing for more diversity.

During public comment, Johnston referred to the December Faculty Senate meeting, where she claimed President Blake made remarks on the hiring process.

“Dr. Blake made it clear that her decision [when hiring faculty candidates] would be influenced by her perception of the candidate’s gender, race or ethnicity,” Johnston claimed.

She continued, reading off of Governing Board, Faculty Senate hiring policies and equal employment opportunity laws.

Johnston mentioned that the laws say officials cannot “discriminate based on a person’s race, gender, ethnicity or other characteristics, in particular we cannot give preferential treatment on those basis either.”

Vice President of the Governing Board and trustee John Halcón has been at the forefront of these diversity discussions at the board meetings. In response to the claims made by Johnston, Halcón said that Palomar is an influential part of the community, so the school must move forward with the direction the community is going.

Halcón further explained that if Palomar cannot represent the community at large, the school will remain a “stagnant” part of the community.

“If we look at the community in which we serve, you’ll see a huge gap between Latinos in the community,” Halcón said. “At what point are we going to accept the simple fact that in the end, the community is going to continue to grow and we’re going to be stagnant when it comes to representing that community.”

After talks regarding campus diversity, a Diversity Report was released on Feb. 26, 2019 that detailed the demographics of the Palomar campus community.

The report revealed that 67 percent of faculty members were White/Non-Hispanic and that 33 percent were either Asian, Hispanic or Multi-Ethnic, a stark contrast in comparison to the student population at Palomar College.

The report also revealed that 35 percent of students enrolled at Palomar are White or Non-Hispanic, and that 65 percent were Hispanic, Asian, African American, and Multi-Ethnic.

“We all share that goal of increasing diversity. We get it. We know what it brings to our students,” Pearson said. “But a good leader would have brought us to the table before the search process to discuss ways to improve the chances of finding qualified diverse candidates legally instead of wasting hundred of our hours disregarding our policies and procedures.”

Laughlin also mentioned the Biology department is just one of the departments that has experienced a struggle when it comes to the hiring process.

Halcón has not yet responded to the recent remarks made regarding hiring issues, but he has been consistent in advocating for the push for diversity within faculty.

“We have to do something,” Halcón concluded his response at the Dec. 11 meeting. “Because if we don’t do it, were going to fail in the long run.”