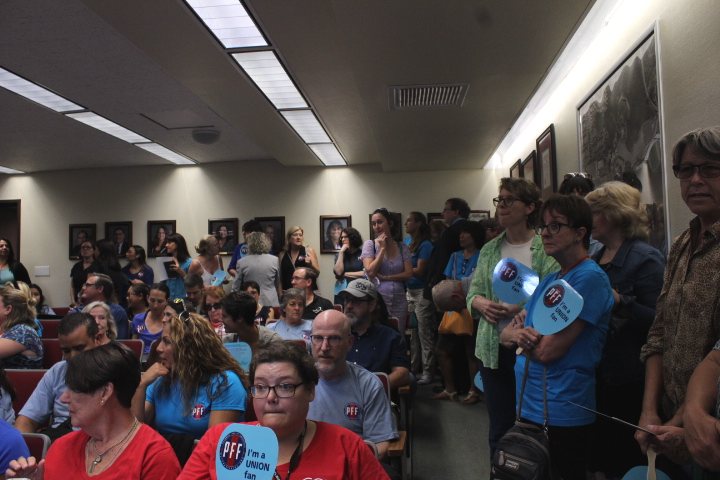 Governing Board Overview for Sept. 10 meeting

Tensions were high at the Governing Board meeting as members of the campus came forward to voice concerns on Sept. 10.

Room SSC-1 was packed with members from the campus community. Palomar police chief, Chris Moore, was present to rotate attendees in and out of the room for safety precautions. When some were asked to step outside, attendees began shouting to “change the room.”

Teresa Laughlin, Co-President of the Palomar Faculty Federation, cited hurried decision making, lack of executive leadership on behalf of Palomar’s vice presidents, and failure to adhere to governing board policies as a cause of concern for the future of the college.

“Palomar College is not a plane with one pilot,” Laughlin said. “It is a complicated system; an academic community of diverse individuals who need to pull together at this critical time.

Beth Pearson, a biology professor at Palomar, discussed her concerns and experience with the new efforts pushing for diversity when hiring faculty candidates. Pearson claimed that when the Biology department selected qualified faculty candidates, the applicants were dismissed during second level hiring discussions.

“When we asked for reasons why the candidates we brought forward were not good enough, we were not given reasons,” Pearson said. “In fact, we were asked to go back into the pool and try again with no solid justification for rejecting the top candidates of our search.”

Pearson said that the decision to dismiss the candidates was on the basis that they were not “diverse enough.”

“This isn’t shared governance,” Pearson said. “Honestly, it feels like a dictatorship.”

“You must teach a 45 percent load (of students) to qualify for the lowest possible level of healthcare available at Palomar,” Baer claimed. “A canceled class means canceled health insurance.”

Baer called for the board to take part-time faculty health insurance into consideration and to provide minimal benefits for their employees.

“Three months ago, the board rejected live streaming and closed captioning based on a highly misleading testimony given by an at-will administrator,” Blankenship-Williams said.

In her public comment time, Blankenship-Williams made remarks directed towards President/Superintendent Blake, claiming that Blake “gave her little chameleon excuse” to prevent the implementation of live streaming.

“You’re making snide and rude comments,” Hensch said. “I wouldn’t let anyone speak about you in a meeting that way.”

Later in the meeting, Associated Student Government President, Linus Smith, presented the idea to form a work group to do more research regarding the potential implementation of an Overnight Parking Program for students facing housing insecurities.

“I agree, a hundred percent,” Trustee Nina Deerfield said. “We are supplying food (for students), we should have a safe place for them to be at night.”

Nearly all of the board members, including Deerfield, Hensch and Norma Miyamoto, expressed their support for an Overnight Parking Lot. Despite this, they also shared concerns regarding campus safety, facilities and funds that will support the program.

Halcón shared that he was once in a similar situation as a student, telling those present at the meeting that when he attended UCSB, he had spent three weeks living out of his pickup truck.

Halcón said that he spent those three weeks showering in the school gym and parking in gas stations, a Kmart parking lot, and the school parking lots.

“I don’t think there’s anybody on the board that would oppose this,” Halcón said. “I don’t oppose it. The question becomes where are the resources necessary to ensure the security for students on campus when they’re here.”