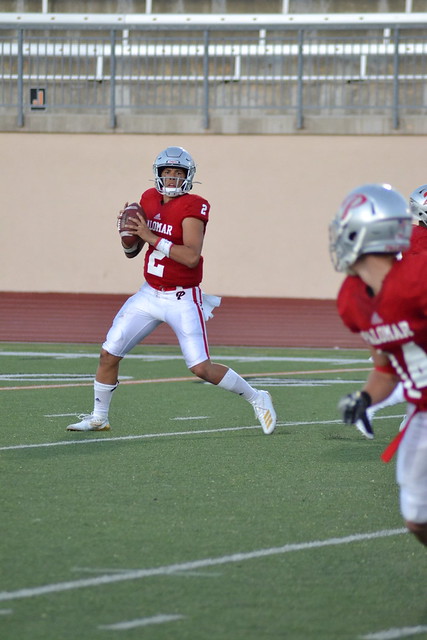 Quarterback Rodney Thompson started the game strong with two touchdowns in the first quarter. The first one was a 21 yard pass to wide receiver Johnny Armentrout and the second one was 32 yards to receiver Kyran Griffin. Thompson would finish the night 21-35 with 235 passing yards and 43 rushing yards on six attempts.

After the game, Thompson said, “I’ve got a lot to work on, but we did well enough to get the win, so that’s all that really matters.”

The second touchdown was set up by an interception from David Quintanilla.

The Comets defense was able to shut out the Raiders offense in the first half, keeping the game 14-0 at halftime.

Head Coach Joe Early was happy with his team’s first half performance. He said, “We got off to a great start scoring two touchdowns in the first quarter and the defense did a good job holding their own.”

The second half of the game had more offense. After forcing a fumble on the second half kickoff, the Comets marched down the field. They settled for a 22 yard field goal from kicker Mark Meadors to extend the lead to 17-0.

The Raiders would finally get on the board with 6:20 remaining in the third quarter when quarterback Isaiah Johnson threw a 35 yard touchdown to wide receiver Dylan Lee to make the score 17-7 Comets.

The Comets would respond with a one yard touchdown run by running back Lamar Raboteau. With 2:34 left in the third quarter, the Comets lead 24-7.

Johnson would immediately get the Raiders on the board again with a 45 yard rushing touchdown, but  the extra point was blocked. The score through three quarters was 24-13 Comets.

In the fourth quarter, both teams would score once. Damon Wigand had a one yard rushing touchdown for the Comets to get them to 30 points. For the Raiders, Thompson would find Lee for a 37 yard touchdown the pair’s second scoring connection of the night.

Linebacker Kameron Camp was the leading tackler for the Comets with nine. Tommy Woo had the lone sack for the Comets, to go along with his five total tackles. Jay Craft, who was previously at Kansas State University, was lockdown against opposing receivers all night.

Coach Early said, “We feel like we left a lot of points off the board, we definitely have things we need to clean up.”

Their next opponent is Southwestern College on Sept. 14. The Jaguars lost their first game 14-4 on Sept. 7 against San Diego Mesa College.

Coach Early said, “We will have our hands full… they’re a good football program. We have to first and foremost concentrate on us getting better.”

The Jaguars beat the Comets twice last season, including a 28-24 game in the Beach Bowl in round one of the playoffs.