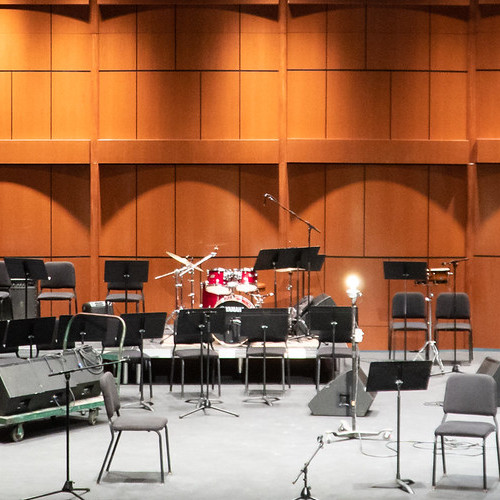 The many sounds of Palomar College’s music department

The semi-filled auditorium of the Studio Theatre was treated to the melodious sounds of the Palomar Brass Ensemble, Palomar Saxophone Ensemble and the Palomar/Youth Philharmonic Orchestra (YPO) Percussion Ensemble on Sunday, March 10.

The eager audience comprised of other students, family members and music lovers alike who listened intently to every sound.

The Palomar Saxophone Ensemble was directed by Paul Kurokawa and comprised of four members. The first performance and one of my favorites was a lively rendition of “Two Cuban Dances” by Ignacio Cervantes and Arr. R. Denwood which was accompanied at the end with a mix of Argentinian influences.

The quartet also performed “ ‘Round Midnight” by Thelonious Monk, Cootie Williams, Arr. R Muller and Irion and “Ulla in Africa” by Heiner Wiberny which provided a playful, party transition to the percussion ensemble drawing on African Highlife as a major influence.

The Palomar/YPO Percussion Ensemble formed six years ago and directed by Heather Barclay, comprised of eleven members. The audience was delighted by the beginning act entitled “Sacks Appeal” by Alan Black which comprised of the group making music using plastic bags.

Rhythmic clapping and feet stomping accompanied them as they ended with a familiar statement, “Paper or Plastic.” Former Palomar College President George R. Boggs and his wife Ann, both remarked that the performance was impressive, enjoyable and the performers were very talented.

Amidst the rearranging of instruments, Heather Barclay educated the audience about the uses of instruments and the different influences of styles that were in their performance pieces. “Sofapilla” by Chuck Ricotta, the closing performance for the percussion ensemble was not only an audience favorite but also one of the performers Ash Baek, as well.

Along with Lindsay Sackin, the two expressed that they thought the show went very well. The two high school students encouraged everyone to attend the next event. This ensemble was fascinating because comprised of several instruments I had never seen before.

Not only was it a treat for the audiences’ ears but also a delight for the eyes as some instruments made unexpected sounds. The percussion Vibra-Tone is a metal cylinder that when hit emits a tone that can be manipulated by pressing a hole in the middle.

The Palomar College Brass Ensemble directed by Paul Kurokawa comprised of nine members who enchanted the audience with a series of songs from as far back as the seventeenth century.

Wendy and John Murphy encouraged others to attend, pointing out that the theatre itself was nice and intimate and remarking that watching a professional group of performers was a worthwhile way to spend a Sunday afternoon.

Their daughter Hope Murphy plays the French Horn in the brass ensemble.

Of course, no rendition would be complete without playing, “Canon,” by Johann Pachelbel and arranged by W. Barnes arguably one of the greatest hits of classical music.

Even if you aren’t a music connoisseur, this event provides something for everyone.