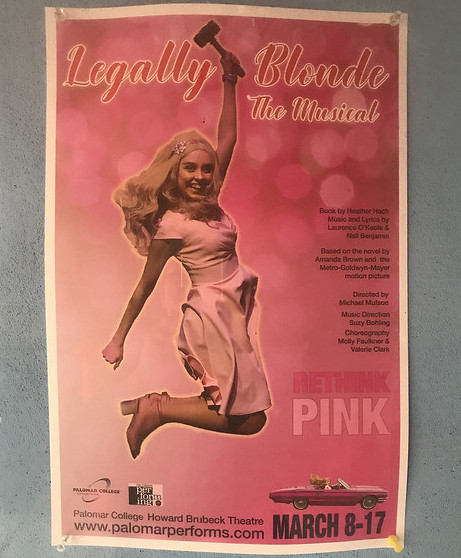 Palomar’s performing arts department produced “Legally Blonde” the musical as its biggest show in a season dedicated to works created by women.

Director Michael Mufson believes the show has “ a misperception of being kind of frivolous,” and it’s exactly that perception of women’s stories that Mufson intended to make audiences reevaluate.

Backstage during a pick-up rehearsal, the cast emanated enthusiastic motivation to tell the story of Elle Woods: the UCLA-sorority-girl-turned-Harvard-graduate heroine of the show. As backing tracks for the show’s bright, high-energy score were heard faintly from the nearby stage, actors danced and harmonized through the hallway behind it.

Matthew Javier, who played Emmett Forrest, says the show was “a great choice, because it sends the message that ‘girly’ does not equal ‘inferior’ in a really fun and easy-to-digest way.”

Javier’s comment aligns with the story of his character, who helps Elle see that she shouldn’t have to change her feminine wardrobe and bubbly personality to be taken seriously as a competent law student.

In other words, Harvard should learn how to “rethink pink”: a phrase coined by Mufson in the program. Elle Woods is known for a closet made almost exclusively out of the shade – and she spends most of the show having her lawyer instincts, strong value system, and hard work dismissed by the rest of Harvard because of it.

Inspired by the “Me Too” movement, as well as as what he describes as “a national focus and and movement on women’s voices,” Mufson’s directorial vision was to shift the paradigm which tells us that being masculine is inherently better than being feminine.

Thomas noted that she didn’t think male cast members were intimidated or embarrassed by that at all.

“It’s a great theme,” she says, “I just wish we would have done it sooner.”

As for the seasons to come, Mufson said the department hasn’t set a theme for its productions next year. What he does know is that the performing arts department is now committing to do a musical every year – a change from its history of only putting one on every few years.