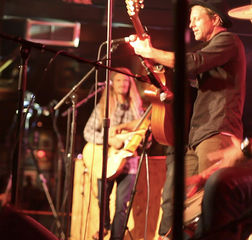 Photos and story by: Pat Hartley

From outrage to singing, from disgust to dancing from negativity to positivity, such was the seismic range of emotions at the Songs for S.O.N.G.S. (San Onofre Nuclear Generating Station) rally at the Belly up Tavern in Solana Beach on October 8, 2018.

At stake is the fate of 3.6 million pounds of lethal radioactive waste perched in substandard canisters only 5/8 of an inch thick (approximately the width of a nickel). The canisters sit only 108 feet from the Pacific Ocean. Belly up’s President Chris Goldsmith joined with the Samuel Lawrence foundation and other groups to address the issue. ”Why isn’t the fight over? Because when we weren’t looking, the people that created this waste decided to try to bury it 108 feet from the waterline.” Goldsmith said.

The people Goldsmith is talking about are So-Cal Edison who own 80% of the San Onofre Nuclear plant along with SDGE. The free event attended by around 500 people came together in just a few weeks with a social media post receiving over 25,000 views and shared by Surfer Magazine. The stage doubled as a platform for musicians like Jupiter and Okwess from Congo, The B-side Players and also speakers from local city councils and committees.

“This is Bullshit” was the title of the first song of the night performed by surf journalist and event host Chris Cote’. The frustration and disbelief was evident from the crowd as speakers described the negligence and corrupt process that caused the San Onofre Nuclear plant to be shut down and decommissioned amidst a string of accidents and criminal investigations.

Speakers and musicians echoed several of the same concerns: The storage containers are substandard (only 5/8 inch thick) compared to Japan and Europe where they are 13 inches thick. Also the storage location is built on 2 fault lines putting them at risk of earthquakes and tsunamis similar to Fukushima.

Furthermore the location is so close to the rapidly eroding coastline and only 3 feet above sea level that predictions of rising seas and the corrosive salt air make the location a liability. Former US Navy Rear Admiral of the Pacific fleet Len Hering Sr. summed it up. “They say, well theoretically it (the storage) could be done. But I say you don’t screw around with theoretical nuclear catastrophe! You either know how to do it, or you don’t” Hering said. 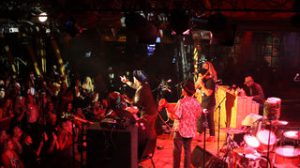 Activists from all over the world weighed in including Native American activist Leona Morgan and Kathy Iwane who lived in Japan during the Fukushima tsunami and meltdown. Although Japans reactor melted down releasing radiation its 13-inch thick storage containers withstood the earthquake averting further disaster. San Onofre’s 5/8 inch thick casks are only rated safe for 17 years and have no way to be monitored or removed.

The music of local artists Iron, Sage and Wood, John Foreman of Switchfoot, Rob Machado and The Shift helped to lighten the feeling of anger and at Edison. Betrayal was another emotion felt towards the government agencies like the CPUC (California Public Utilities Commission) and the Nuclear Regulatory Commission (NRC) who supposedly regulate the nuclear waste.” If we don’t fight back our kids die, our homes are worthless and everywhere from San Diego to LA is wiped out.” said Former Pro Surfer Ian Cairns.

The rally united several different groups, some have lawsuits pending involving Edison or the NRC. It also united people that have been fighting against San Onofre since before it was built with younger generations.

“It’s empowering to meet people fighting since day one” said Josh Weigel guitarist of The Shift. “To have people like the Belly-up get behind this production and social media shooting all over the globe with smart people networking, hopefully we can make a change and make it at least safe” Weigel said.

With terrorism always a threat these days, the location so close to interstate 5 and the beach is also vulnerable to attack. Many groups are urging Edison to move all the canisters east onto Edison’s land higher above sea level and closer to Marine Corp base protection.

But given Edisons record of buying cheap containers and charging taxpayers for their failed nuclear reactor, it will take more then strong words. Hering who is also Executive director of The Center for Climate and Security urged action and to take our elected officials to task.

“Tell them this is not a regulatory issue, this is a safety issue and the constitution of the United States directs this government to provide for our safety and they are not” Hering said.

If you don’t want another Fukushima, contact your local congressman, senator, or the Edison Board of Directors. They aren’t going to change their tune unless we turn up the volume.