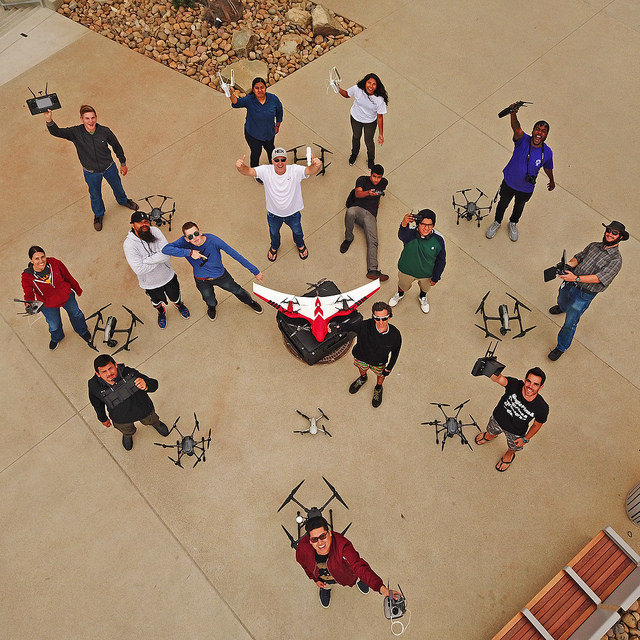 Palomar’s Geography and Digital Imaging Departments have combined for a groundbreaking Associates Degree.

According to Consulting firm Mckinsey and Co. drones are the next new technology that will both disrupt and construct whole new industries. They stated that the drone economy has already grown from 40 million in 2012 to earning 1 billion in 2017. It is also predicted to leap to a 40 billion industry by 2026.

“You’re definitely finding a new use for this technology everyday,” said Wing Cheung, Palomar College Professor of Geography. Cheung, along with Professor Mark Bealo has overseen the creation of the UAS (Unmanned Aerial Systems) Associate Degree at Palomar.

Jobs for pilots, new software, infrastructure and maintenance of drones are growing. The FAA states that more than 66,000 remote pilots were certified in 2017.

Palomar College has skyrocketed ahead of other colleges by earning one of ten NSF (National Science Foundation) grants in the whole country to develop a curriculum to grow and educate students, businesses and community about the use of drones.

“First of all, it’s just fun to fly, those drones just, you move the joystick and the drone moves. It’s just like the real life video game,” said Palomar Drone student and videographer Zach Camerino.

But these drone aren’t just for teenagers flying in the park for fun. The professional drone operator of today can fly an $8,000 drone equipped with thermal infrared sensors, laser ranging or photogrammetry sensors that create geologic and geographic data and images that are used for industries such as farming, energy, insurance, law enforcement and firefighting.

But just flying the drone isn’t enough, that’s why the degree requires classes in GIS (Geographic Information Systems). “I operate the drones but I’m also on the other side learning GIS classes, so the science side behind the data that we’re capturing, able to analyze it,” said Palomar Drone student Mikela Garza.

Depending on the client students can gather and analyze terabytes of data from multispectral sensors such as NVDI (normalized vegetation difference index), and high-resolution images. “You can do surveys, inspections, digital models to surface models, there’s tons of stuff you can do with drones nowadays,” said Palomar student Gerardo Perez.

“We’re showing farmers an area that has healthy vegetation and an area that are not doing so well,” Mikela said.

Mikela and Gerardo were invited to represent Palomar College a summit in Washington DC hosted by the NSF in October. There they presented maps of some of their different types of imagery.

By learning how to process and analyze the geographic and environmental data with GIS software drone pilots become subcontractors that can compile 3D models or an ortho-mosaic map to be used for construction, conservation, agriculture, real estate or law enforcement clients. Thermal infrared sensors also can help firefighters identify lost hikes or hot spots for water drops.

Some students just want the pilot’s license and opt-out of the geography courses but still benefit from the instruction.

“You start out super basic, then you get up and use these $5,000 drones and then you get to use this $3000 dollar software that you would never be able to use without paying upfront,” said Camerino.

Palomar College recently partnered with Uber Eats to share feedback with the community on the test program.

Currently drones can only fly below 400 feet, within sight of the licensed of the operators and not over crowds. Amazon spent 9 million last year lobbying the FAA to amend those restrictions.

With the spread of access to data and companies wanting more thorough information to make decisions drone pilots and Geospatial data analysts will be in demand. Whether is humanitarian efforts like delivering medicine, monitoring and restoring habitat, surveillance or building inspection drones are already making a big difference to the bottom lines of many industries.