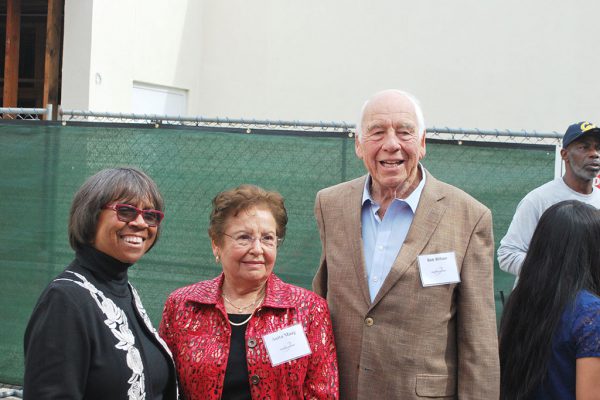 Palomar College expanded its capacity to address the needs of students facing food insecurity, with the opening of the Anita and Stan Maag Food & Nutrition Center on Oct. 29.

The Nutrition Center, located behind the cafeteria in the SU-Quad, was made possible through a donation from local philanthropist Bob Wilson, who last year, donated $400,000 to the project.

During the grand opening ceremony, President Joi Lin Blake recalled her meeting with Mr. Wilson where she, alongside former Phi Theta Kappa President Forrest Ponsot and Office of Student Affairs Director Sherry Titus, outlined the costs required to fund the project. She said that at the time, she believed he would donate at least enough to cover the cost of a commercial refrigerator.

However, when they met with Mr. Wilson, Dr. Blake said “we were sitting there, and he’s looking at the list and he says ‘well I was prepared to give you X amount of dollars’ and we were like ‘oh okay.’ Then he said ‘but you know this is a well thought out plan for your students, and I will fund the entire project, and I will give you some extra in case you go over budget.”

The urgency for the food bank has been made continually evident through studies done by the HOPE lab from Wisconsin University. According to their most recent study, published in April, which looked at 43,000 students on 66 colleges campuses throughout 20 states. They found that 36 percent of students had been food insecure in the last month, 36 percent had been housing insecure in the last year, and nine percent had been homeless.

The Palomar food pantry has assisted in addressing food insecurities in the community on and surrounding the campus for 34 years. They have served 12,000 meals reaching 3,000 households in the area.

During her speech at the grand opening, Titus referenced a quote from a former Associated Student Government senator, Trevor Wilcox, who said that the hardest thing for students going to college should be taking classes.

Dr. Blake echoed this sentiment when she said “we’re committed not only to helping students reach educational goals, but to support the whole student.”

One of the main goals Titus aimed for in expanding the food bank was to take away some of the stigma that comes with not having enough resources by beginning an open about food insecurity.

Dr. Blake said, “We want our college to be an environment where students’ needs are met with dignity and respect.”

Working alongside Dr. Blake and the Student Government, Titus hopes to continue the expansion of the food pantry until it resembles a true farmers market. She plans to keep expanding the center out into the quad making resemble a farmers market.

“This represents all the good about our community,” Titus said.