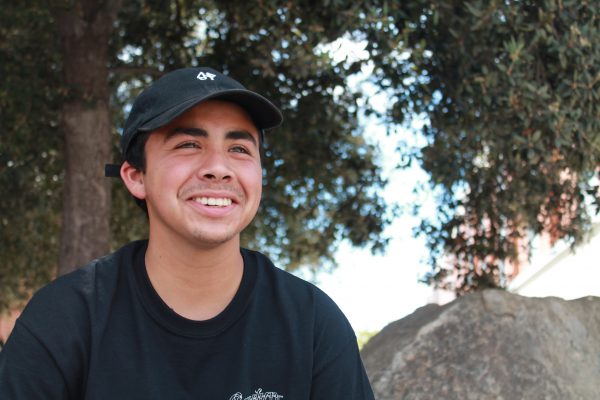 Ambition Made of Negativity

Moreno began writing his own raps at 14 after being suspended. When he was 17, he began to take his love of rapping more seriously. He created a Soundcloud and began promoting his music.

During senior year at high school, he began putting up posters on construction paper advertising his lyrics and Soundcloud. “I posted it all over the classrooms and above water fountains where people could see it,” Moreno said. “That’s when I knew I was taking it to the next level.”

When Moreno is rapping or acting as an MC at an event he goes by the name Amon, which stands for “Ambition Made of Negativity.”

When Moreno began pursuing his rap, a family member of his, who Moreno preferred to keep unnamed, did not support his career. In the past, Moreno said he used this as an excuse as to why he wasn’t further in his career, allowing the negativity to bring him down.

“But at the end of the day I realized it’s all me. I am the only one stopping me from my dreams … I was able to use the negative energy instead of bringing me down, to bring me up,” Moreno said.

An unsupportive family member has not been Moreno’s only barrier to hurdle in his rap career pursuit. He is currently a full time student studying business with a minor in marketing, while working 30 hours a week as a landscaper. This leaves him often working on his raps beginning in the late night and continuing into the early hours of the morning.

Longtime friend and fellow MC (Master of Ceremonies), No1mc, who asked to go by his stage name expressed his admiration and support for all that Moreno works to accomplish stating, “He is my boy. I love that he pushed his music real good, he is a hustler.”

When Moreno isn’t rapping he spends his free time Hosting/MC-ing events starring local talent, bringing out local vendors, and promoting events. Moreno aspires to give artists a platform to perform and get their art out into the open, the kind of platform he didn’t have when he began his career.

“Apart from just following my dream of being an artist, I also like to help other artists succeed” Moreno said.