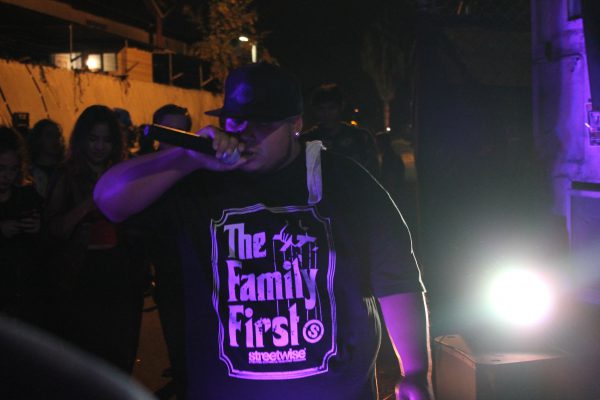 Amon the MC (Master of Ceremonies), which is his stage name that stands for Ambition Made of Negativity, is a Palomar student that began his rapping career at the age of 14, he now currently works to provide performance platforms for underground artists to come and celebrate their community together.

The event is called Hip Hop Alley, and is sponsored by the PaintBooth located in the local North County Area. Attracting well known artists from all over Southern California such as, No1mc, Brother Cuban, and Verde.

With an estimated number of around 100 hip hop heads that showed up to show their love and support in the back ally behind the PaintBooth, bringing the hip hop community back to its roots in the street, creating a down to earth feel and embracing all elements of hip hop culture.

When asked how he felt about seeing so many people show up to the event, Amon the MC simply stated, “No words, love.”

Brother Cuban, a stage name for another MC at Hip Hop Alley, began his path when rapping was the only way he felt he could get out his truth and what he was experiencing at that time in his life.

Today, Brother Cuban views this community of underground rappers as family, and feels it is something special more people should be a part of.

Many of the artists feel hip hop today is being loudly defined by mainstream music, which contains a lack of texture compared to their underground community. To them Hip Hop Alley is just one of many platforms to come and celebrate the validity of their family.

No1mc, another performer at Hip Hop Alley who preferred to be referred to by his stage name explained, “It’s real and their is substance to it. Mainstream is kind of simple minded stuff and underground is where the real stuff is at.”

Mainstream rappers such as Lil Xanny, Lil Pump, Lil Uzi Vert, and Lil Peep tend to rap about getting drunk, partying, money, women, drugs, and life with a negative perspective.

Verde, another stage name and the only girl MC at Hip Hop Alley, expressed her passion to change this perception in rap culture, and begin to use hip hop as a way to better the world rather than destroy it.

In the final song of her set, Verde advocated recently passed artist Mac Miller, explaining that the idea of drugs then begins to be glorified rather than using the tragedy and their musical platforms to make a change.

Verde now believes that it is time to begin to move these stereotypical ideas in hip hop off of the mainstream platforms and begin promoting world change through the hip hop community.

“I feel like they need to know that love is greater than hate. Everything that is mainstream right now is egotistic and hateful. We need to turn towards the light,” Verde said.

Sept. 22 Hip Hop Alley Jam was just one of many examples of a community coming together to celebrate the culture of real hip hop and the voices that bring it together.

For links to the artists mentioned in this article and future events refer to the online article at the-telescope.com.