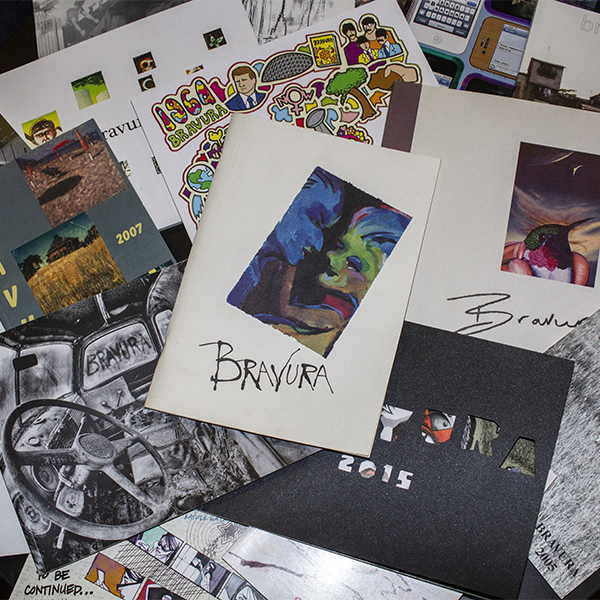 The Bravura Literary Journal has been a source of creativity since 1964.

Student run, each year runs the task of not only receiving submissions, but going through them and selecting work from Palomar’s diverse community. Dr. Rocco Versaci and Dr. Carlton Smith have been overseeing the supervision of the literary journal since 2000, and both teach creative writing at Palomar.

Students who sign up for the class that puts together the journal—English 137—make the decision on what gets accepted and what doesn’t. Versaci and Smith try to guide the students, offering advice on what to look for in a piece: what may make a strong poem or a strong story.

“Sometimes they come in the fall, but this year they got them right out of the gate,” Versaci said, adding, “80 to 90 percent of the stories come in a day or two before the deadline, so it’s important that they [the students] keep up on it all semester.”

The time is split up between those wanting to be poetry editors, and those who want to do fiction, which allows for the load to be manageable.

The biggest first task of every semester is to get the word out and get submissions coming in. They get submissions from the sciences, from ESL, and students from the class go and make visits to different departments with flyers, asking people to submit. “It’s been really successful,” Versaci said.

“Part of the course is how to be an editor, and particularly, an editor that serves a diverse community such as ours at Palomar,” Smith said. Part of the experience for the students is to understand the responsibility, and to deal with the ethics of publication. It’s not an easy process, but students manage to make selections in a committee and go through the difficulties as well as the reward when it finally does get published in May each year.

“One student went to graduate school, did work outside of the class with women in a shelter there in the area, and had them put together their own literary journal, and she compiled that based off her work she had done as an editor on Bravura,” Smith said. The other aspect of the journal is that while the writers and artists represent the journal, it doesn’t just represent the English department, but submissions come from all over campus.

“Another editor, a returning student from UCR, became instrumental in running their literary journal, and she began at Bravura,” Versaci said.

There’s a real-life application to it. “In the issue coming out, there’s a full color spread of the work done by a lot of the students in the wood working program,” Versaci said, adding, “if you can imagine, the amount of time and artistry that goes into something like that is totally comparable to writing a story. They spend hours and hours doing it, and we wanted to feature that.”

In terms of what they look for, editors look for strong details, and a strong sense of conflict. “One of the truisms of creative writing is that you want to show, not tell,” Versaci said, adding that when they turn in drafts, they try

to move them more into this mindset—is the story engaging? Is the poem concrete? And another thing both advisors ask editors to look for—does it make us see something in a way they hadn’t thought of before?

Many of the students who have been editors for Bravura have gone on to not only transfer, but attend graduate school and graduate programs in creative writing and English.

“There’s a thrilling anticipation on campus waiting for the journal to come out every year,” Smith said, adding, “everybody waits—its crazy, the talent here at Palomar. And the journal represents that.”