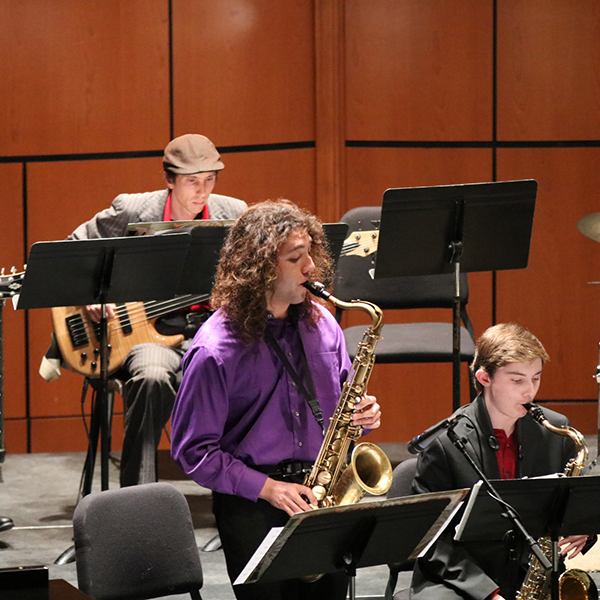 “Swingin’ for the Fences” springs into season

by Brooke Reotutar and Skylar Miller

Palomar’s Big Band Jazz Ensemble filled the Howard Brubeck Theater with loud melodies that struck the heartstrings of the audience. At their first of two shows this semester, the ensemble kicked off the spring season with their lively concert, ‘Swingin’ for the Fences’ on Friday, March 16.

Bringing the inspiration of America’s old ‘pastime,’ the Big Band Jazz Ensemble emulated the atmosphere of attending the first ball game of spring.

“Many of us associate spring with baseball season,” said Paul Kurokawa, Director of the Big Band Jazz Ensemble. “After I heard the song ‘Swingin for the Fences,’ I knew it was a perfect theme for our concert.”

Kurokawa has been teaching at Palomar for seven years as a music instructor and is also a professional performer.

The Day Jazz Ensemble, Big Band’s first group, opened the event with four upbeat instrumentals featuring two jazz vocalists, a new concept that Kurokawa claimed is well-received. Lara Hardin filled the theater with a sweet ballad, ‘A Nightingale Sang in Berkeley Square,” while Nick Altman brought back the classic and familiar tune of Frank Sinatra’s ‘The Way You Look Tonight.”

While the band is mostly comprised of students, one Palomar faculty member stands out on trombone as he sits for his 30th year on the Jazz Ensemble. Peter Phillips teaches art and engages with the college’s musical offerings.

“Arts and music have always been at the core of what Palomar’s about and is a meditative outlet for Peter,” said Phillips’ wife, Melinda Finn.

Finn explained that a proud sense of unity and community develops as a group of musicians perform together, regardless of demographics, ethnicities or age. “The band has so many different members from different walks of life, we have high schoolers and senior citizens alike.”

Big Band’s second group, the Night Jazz Ensemble, closed the show with seven tunes, including the song in which the show gets its name. Their arrangement of ‘Swingin for the Fences’ was written by Grammy-Award winner, Gordon Goodman and featured a unique instrument with a shocked audience members: Kurokawa’s whistling. Kurokawa explained that he whistled his solo to surprise viewers and contribute to the theme of a spring day in a baseball stadium.

“It’s fun to come up with new concepts for shows,” said Kurokawa. “How music affects the lives of people is as vast as the number of people who do it.”

Amy Walls, a freshman on the Night Jazz Ensemble played saxophone and a vibrant solo tune on the flute–a challenge she deemed is worthwhile. Walls stated that Immersing herself in the colorful world of Jazz music has enabled her to find direction in life.

“I didn’t really know what I was doing right out of high school, but music is something I have done almost all my life and it is something that stuck with me and I am passionate about,” said Walls.

The concert was one of many shows to come, and serves as a building block for many of the musicians. Kurokawa noted that the fast paced, intricate and interweaving harmonies of the brass instruments, percussions and strings during the concert was a result of countless hours practicing, stating “we try as a community college to prepare them to transfer and build their skills for beyond. If that’s not their goal, we want to inspire them to keep playing.”