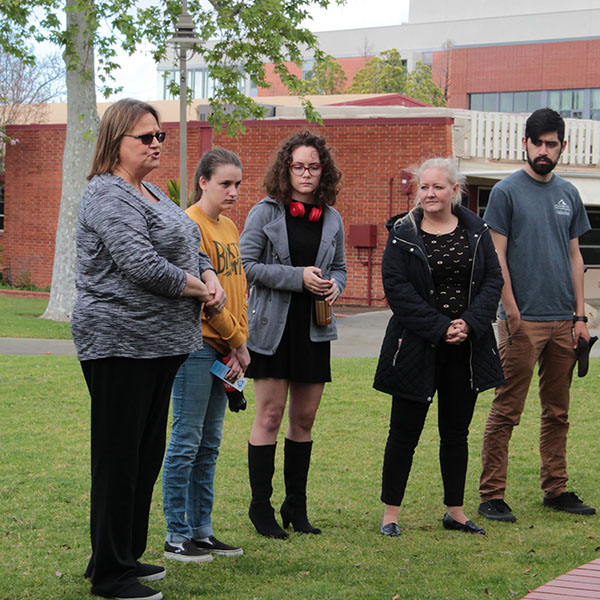 Palomar joins the national walkout in a fight for gun control

“Enough! Enough! Enough!” chanted the crowd of around 50 students, faculty and staff who participated in the national walkout event against gun violence.

Members of the Palomar community gathered to show their support for a national effort to oppose gun violence at 10 a.m. on March 14 at the clocktower, exactly one month following the Parkland Highschool shooting in Florida.

“The idea of semi-automatic weapons, people buying them when they are under 21-year-old, people buying ammunition online, with no identification and no checks, we’re done with that,” said Barb Kelber, an English professor at Palomar.

The participants formed a circle around the clock tower. Throughout the event, which ran around twice as long as the intended 17 minutes, participants shared their beliefs on the issue of gun violence.

“Chances are you are going to wake up one morning you’re are going to turn on the news and there is going to be another one, and another one, until we demand change,” Angy Moran, a student, said in regards to school shootings.

“At a place of education, we want to feel safe,” Kelber said. “We grieve the fact that our leaders sometimes do not have the courage we wish they would have. We urge them to be brave on behalf of our children, on behalf of all of you.”

The national event was organized by the Women’s March organization, it was to take place for 17 minutes, one minute to symbolize each life lost in the Parkland shooting. The walkout event first came to Palomar College’s attention by a student named Brennen Lisenbe.

Lisenbe had made a public comment notifying the Associated Student Government (ASG) of the walkout during a meeting in late February. “The purpose of the [walkout] is to bring attention to the many thousands of gun deaths we’ve had this year,” Lisenbe said in a previous interview done by the Telescope. “And the fact that after we’ve had numerous shooting incidents in schools and around the world, and we still haven’t had any proper gun control or proper gun legislation.”

The ASG did not make any declaration endorsing, nor condemning the purpose of the walkout. However, the ASG President, Chris Hopp, sent a general information email out to the student body the day before the walkout notifying them what time it would occur.

The email also encouraged students to respect the free speech rights of all those who participate, and to remain respectful to any different views or opinions that other students may have.

Hopp, who participated in the walkout said “My personal belief is that it shouldn’t have ever gotten to this place. Student safety should be [the] number one priority. At the end of the day, something has to change.” Several board members of the ASG did attend the walkout, though the ASG is not expected to take an official stance on the matter other than to support students’ right to free speech.

Law enforcement also made an appearance at the clock tower. “We’re just showing our support for the students, make sure that with the age we’re in now make sure that there are no counter protestors, someone that would want to bring a different note, or use this as a platform to discuss something else that might be disruptive to this group,” Chris Moore, Chief of Police for Palomar College said.

After the event had concluded, Lisenbe said “Personally I’m a little disappointed that not as many [students] showed up … I would have liked to see more.” He then continued “I can’t tolerate this anymore, and I’m sure that students here on this campus and around the country can’t be tolerating the gun violence, and the death of students.”

The walkout was propelled nationally on social media by the hashtags “Enough” and “NationalWalkoutDay.” Many people who tweeted out, and those who participated in the walkouts around the country expressed anger at the NRA, including those in attendance at Palomar’s walkout.

The NRA themselves took to twitter, posting to their feed “Let’s work together to secure our schools and stop school violence. We protect our banks, our sports stadiums and our government buildings better than we protect our schools. That must change.” An hour later, they also tweeted “I’ll control my own guns, thank you.”

Lisenbe’s reaction to this was that the NRA might be seeing where the tide is turning, and that a majority of the country stands in opposition to them, and that their tweet about working together to secure schools is more a declaration to protect their own back than to actually put student safety as a top priority.

Several more students spoke at the event expressing their concern about the state of gun violence in the country. One student, Katie Culbertson, mentioned that even during Palomar’s walkout, she was looking at the people around her, and the bags they were carrying, in case of another shooting.