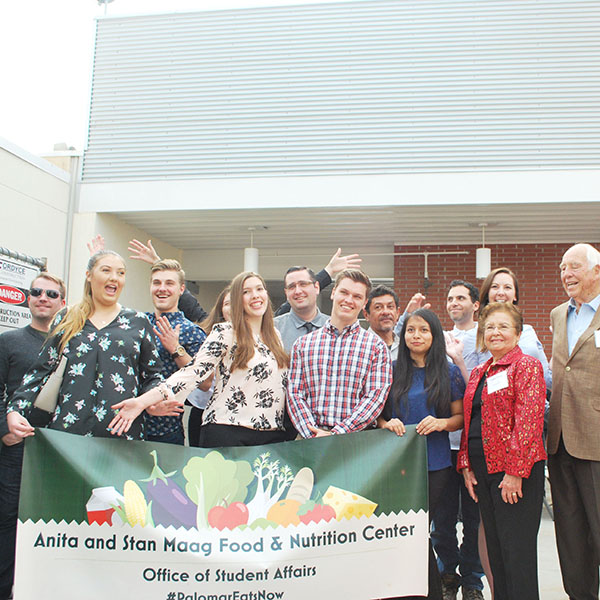 In a 2016 report by a coalition of student resource organizations, it was found that just over one in five students are faced with food insecurity. The Palomar community took a step forward in an effort to help those students.

On March 9, the Anita and Stan Maag Food & Nutrition Center groundbreaking occurred between the cafeteria and SEAL center, in the SU-Quad. Administration, students and the staff of Student Affairs addressed the audience, at some points emotionally, about what the new center means for Palomar and the community at large.

Palomar College has had a food bank for over three decades, however, it has not yet had an exclusively designated point of operation.

“One thing that we’re so grateful for, is that the Anti and Stan Maag Food & Nutrition Center truly is going to become a center,” Supervisor for Student Affairs, Chelsea Kott said. “With the expansion we’re able to offer more services, and more variety of food, so frozen foods, poultry, milk, cheese and offer a more well rounded balanced diet.”

The location for the new Anita and Stan Maag Center is in the SU-Quad, behind the cafeteria in the area that used to belong to the Faculty Lounge. It was chosen when the donor for the center, Bob Wilson, was touring the campus looking for opportunities to make a donation.

Sherry Titus, who is the director for Student Affairs told him that if they had enough money to renovate the lounge, then they could move all operations for the food bank in there. According to Titus, Mr. Wilson said “let’s do it.”

Anita Maag, who was in attendance at the event mentioned the tour that Palomar College President, Joi Lin Blake, gave Mr. Wilson. “I guess they were walking into the food pantry and there was a young girl with a baby in her arms and she went to the president and she said ‘thank you so much for having this available, if it wasn’t for you my baby and I might have gone hungry this week.’ And that clicked with [Mr. Wilson] with his good religious background with the methodist church.” The donation that Mr. Wilson gave to fund the renovation of the Center was $400,000.

Last semester, the food bank served over 1,700 students. In addition to serving students, the food bank is opened to all members of staff, faculty and the public regardless of their relation with Palomar. “We have people that have food insecurities that are staff members,” Titus said. “Why not give them food? There is no harm in giving people food.”

Food provisions for applicants are done on an honor basis, there is no vetting process done by the office of Student Affairs to ensure that they are food insecure. “If they are willing to come in, we’re gonna give them food. We don’t turn anyone away,” Titus said. “You could have a few folks that misuse it, but for the most part we want everybody to know that they can have at least some food.”

During her address to the attendees, President Blake said “If colleges are more retentional about their approach to serving students and colleges are responding to who our students are and their diverse needs, we can increase student success, we can create social change, we can have a social impact.”