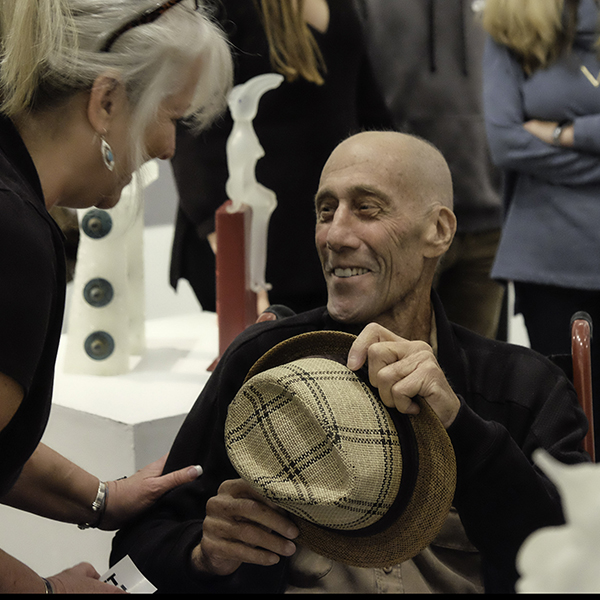 The exhibit included some of Garry’s most recent pieces. The art work was more of an abstract style, using a lot of vibrant colors and an array of techniques and patterns. The art work as a whole, seemed to be very nature inspired, with pieces such as bugs, flowers, mushrooms and many other similarly nature inspired pieces. Garry’s pieces came in many shapes, sizes and forms as well. Throughout the exhibit, there were examples of bowls, vases, plaques and figurines, each intricately designed and created.

Garry Cohen has been crafting his glass art for over 30 years. He was the glass blowing director for Palomar’s glass blowing program for 12 years before he retired. Since then, Garry has been diagnosed with a form of terminal cancer, and now spends most of his time working on new projects and pieces at his studio, Glass Ranch Studio. In his Art State Poster, Garry says “When I became interested in art, the philosophy of the craft process requiring a fundamental knowledge of how to put parts together helped me develop a personal aesthetic which runs most of my work today.”

Garry had a large impact on the glass blowing program at Palomar, “He was very influential on the kind of work that was being made…” says Sasha Jonestein, Palomar’s ceramics instructor. She goes on to say “…the faculty will really influence whether it’s a production glass studio or a sculptural glass, so he really had a lot of students that were going out into the industry and making production glass”.

Journey Through the Burning Sands was a “legacy show”, and Garry’s legacy will continue on through his work, and the work produced by his students. Garry says “I believe that art is not just items to be viewed in a gallery or museum venue but to be enjoyed individually and incorporated into the daily life and to enhance the quality of one’s experience”.

Garry’s exhibit is still at the Boehm Gallery, and will remain there until December 8th. For more information about current, past, or upcoming shows, please visit The Boehm Gallery’s website at http://www2.palomar.edu/boehmgallery/ or call/ email them at (760) 744-1150, Ext. 2304/ boehmgallery@gmail.com.