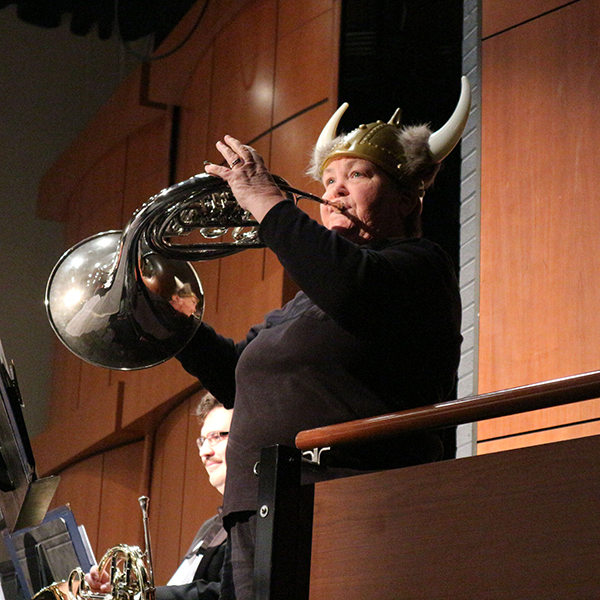 A guided world through symphony

Everyone’s Guide to the Concert Band was a guided tour through the world of symphony orchestra.

“People say they don’t know all of the different instruments,” Bell said in a phone interview.

He said he hopes the audience hears the unique sound of each instrument, which might allow them to appreciate a concert band more fully.

Bell describes the PPCCB as not only a concert band, but also a symphonic band, symphonic meaning many sounds together. The sounds of 85 instruments to be exact.

The National Anthem was the opening number and the audience was invited to stand and sing along. This was immediately followed with a spirited and festive Christmas medley.

The Guide to Symphonic Band began at the top (highest notes) and worked downward to bass toned instruments, beginning with the flutes. Bell explained that the pitch is controlled by the length of the tube. The longer the tube, the lower the pitch. The covering and uncovering holes in a flute change the length of the tube, resulting in a change in pitch.

Next, Bell read a limerick that he had written about the flute, “Flutes sound like families of birds, singing in fourths, or in thirds. Sounding so sweetly, their songs echo tweetly, when gathered together in herds.”

A flute solo followed, then a demonstration of the flute section playing together. This would be the format for each instrument in the band.

Cindy Monohan, who demonstrated the French horn, playing a portion of Richard Wagner’s ‘Ride of the Valkyries’, wearing a Viking helmet, later said “Rehearsing for this concert was a little different than others, for instance, we didn’t know about the limericks until just recently.”

The oboe, Bell said, is one of the double reed instruments, “It makes its sound by blowing air between two very small pieces of bamboo fastened together.”

Next was the English horn, which came from France. But that’s not a problem Bell said, because the French horn came from England.

The final double reed instrument demonstrated was the bassoon, also known as the farting bedpost (as we were made aware by Bell’s accompanying limerick).

Single reed instruments, such as the clarinet and saxophone, make their sound through vibrations of only one piece of bamboo.

The brass instruments, we were told, make sounds by buzzing lips in a mouthpiece, rather than using a reed. The trumpet, trombone, baritone horn, and tuba make up the brass section in the PPCCB.

Percussionist Chris Lichtenberg said this concert was unique because “each section was given an opportunity to construct our own solos, and generally we play from written music.”

During the intermission, Bell conducted a demonstration in the lobby, which he titled the Instrumental Petting Zoo. Among the items on display were some unique instruments which he made himself. The French hose, and a horn that existed as a garden planter before conversion were among them.

For the second half of the show, the band entertained the near capacity audience with a performance of Christmas, Hanukkah, and other holiday songs from around the globe.