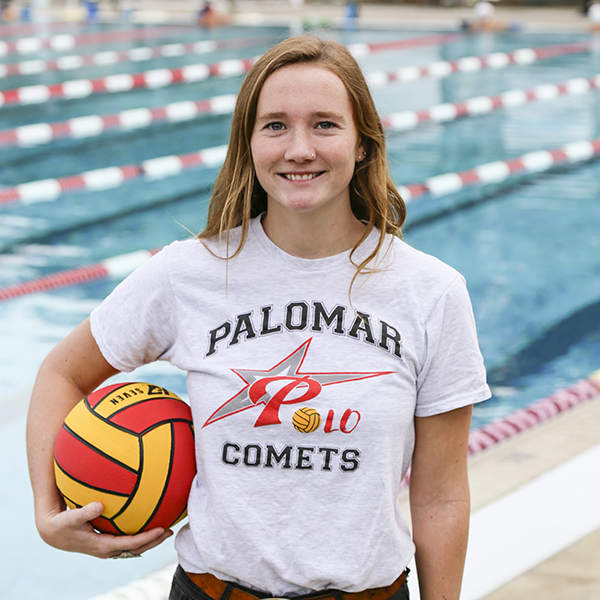 Sydney Thomas has had a goal filled 2017 season for the women’s water polo team.

“Sydney is the type of person that puts everything into what she loves,” teammate Jazmin Handorf said.

Although she lives closer to MiraCosta, Sydney decided to go to Palomar College.

“I didn’t really think I was ready to go off somewhere, and I wanted to keep playing water polo, and they have a good program here, so I think staying here my first couple years was like the best decision, and it’s like cheap,” Thomas said.

Sydney is currently planning on majoring in psychology and transferring to UC Santa Cruz, San Francisco State, or CSU Monterey Bay, depending on whether or not she will decide to continue her water polo career outside of Palomar.

During her two years with the water polo team Thomas has improved her game immensely. After scoring 35 goals in the 2016 season, she has managed to more than double her tally this season.

“She has talent I think that she doesn’t even realize. She’s a good athlete and I think she sometimes surprises herself how good an athlete she really is,” Head Coach Jem McAdams said.

Known for her speed in the water in both swim and water polo, even breaking school records in her first season of swim, Thomas used her natural athleticism to inflict damage of opposing defenses all season long.

“She is very fast and not afraid to take a shot. Has great lobs and backhands that always throw the goalie off their game,” Handorf said.

Palomar’s women’s water polo team have played a total of 26 games this season, with a tied overall record of 13-13.

Contributing to 107 goals for the season as a whole, Sydney finished her second and last year on Palomar’s women’s water polo team, since Palomar only allows students to play for school sports for two years.

“She’s a rather quiet leader, but she gets things done,” Coach McAdams concluded.