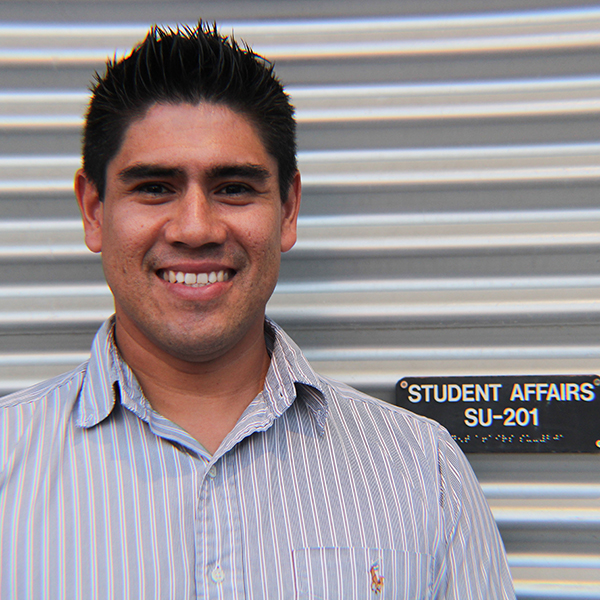 The office of Student Affairs has hired a new Activities Coordinator. Juan Gonzalez is here to serve Palomar students.

Gonzalez began his Palomar journey twelve years ago. He began by taking ESL classes, before becoming a student worker at the Assessment Office and outreaching at local high schools while fulfilling his general education requirements. He then got a part time permanent position as an ESL student advisor at Palomar’s Escondido campus, After a while, he came back to the San Marcos campus where he worked full-time at the ESL office, and began working toward occupational credit working at the Apprenticeship Office.

Gonzalez credits Palomar with preparing him academically for California State University San Marcos, where he studied criminal justice and sociology. “We have a great staff here that will always help the students to continue moving forward to succeed,” Gonzalez said.

Gonzalez was enthusiastic about his new position at student affairs. “I love it” Gonzalez said. “Being able to help our students with the food pantry, be advisory for all of the clubs, all of the activities that we have for students here on campus – from giving a student a Scantron to giving him food to being able to give the right information so that a student can go to the counseling department, financial aid, anything.”

Gonzalez, who oversees the Stan & Anita Maag Food and Nutrition Center, says that the most rewarding part of his job is working with food-insecure students.

Palomar Eats now begins with Gonzalez going to the North County Food Bank at 8 am to buy produce. He then comes back to campus, and sets up with volunteers to serve fresh food and donated Starbucks to students. The events average at least 150 students per week. “They can get whatever they want,” Gonzalez said. “We don’t limit them.”

Gonzalez will also be working with the Associated Student Government (ASG). ASG members have voiced frustration over the current state of how difficult it is for the ASG to host events.

Nayeli Rodriguez, an ASG Senator, spoke about the issues the ASG is facing: “Students’ lack of involvement is a big problem…. Most students only go to their classes and go home right after that. My point is that how would he make great events for students if students are not interested in doing anything?”

However, Nayeli also voiced that Mr. Gonzalez is on the right path, stating that, “He’s the only advisor who is at almost every ASG event; he went with ASG to a conference in Sacramento a few weeks ago. He’s very supportive and nice. I hope he keeps doing all that he’s doing right now and brings new ideas to help ASG members to be more motivated than they are right now.”

Gonzalez is the replacement for the former activity coordinator, Lindsey Kretchman. Several ranking members of the ASG said that Kretchman’s retirement left the ASG in an unfortunate position in regards to hosting events. “Lindsey, she was the work horse of the clubs and [all of the events] that goes on campus” Chris Hopp, president of the ASG said in an earlier Telescope interview.

“The Activities Coordinator works with the ASG on events such as Comet Hour, Comet Celebration, Diversity Day, etc. As student leaders, we don’t have vast amounts of experience in event planning or coordination.” Hopp said. “Having an Activities Coordinator helps to bridge that gap. Lindsey was a great asset to the ASG and her absence has unfortunately shown through in our events over the last year. We are grateful to have Juan with us now and the impact can be seen.”