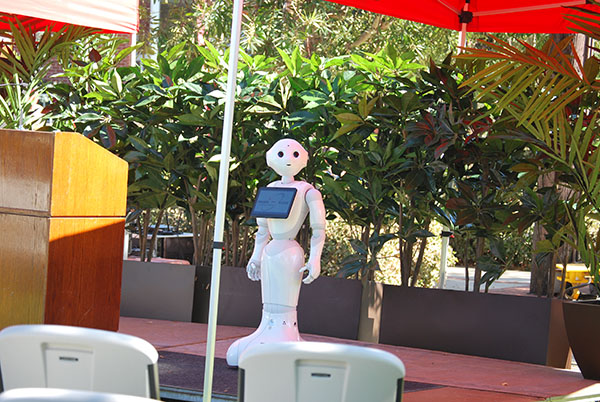 Palomar has become the first academic institution in the United States to utilize an artificial intelligence robot on its campus.

Pepper is an artificial intelligence (AI) robot, originally designed by a French company named Aldebaran Robotics. It has been used in a multitude of settings, including banks, hospitals and even personal homes. Now, the AI is having its debut on an academic institution.

Pepper came to Palomar College over the summer through a company called AI Campus Solutions. It was introduced to act as an additional outlet to provide students with services such as being able to answer simple questions regarding programs offered at the college or where to find the Health Center.

Pepper is currently programmed to answer approximately 800 common student questions. “Over the summer we had some focus groups with students, faculty and staff members talking about what are the typical questions that a student might ask,” Vice-President of Student Services Adrian Gonzales said. Over the next few years, it is expected to go through a continuous process of upgrading, that will allow it to answer more questions, as the need arises.

In a previous interview done by The Telescope, President of AI Campus Solutions, Kenneth Gonzalez, said “We’re wanting to use the technology in phases, it’s a new technology so this fall semester we’re doing a lot of beta testing. We’re hoping that by the end of fall Pepper will be able to do most of the things we want it to do.”

At the official launch, which occurred in the SU-Quad, under the clocktower, Pepper was introduced to a crowd consisting of students, administration, and faculty. “Hi, what a good looking group of students,” Pepper said. “I’m Pepper, Palomar College’s humanoid robot. I represent the spirit of innovation, science and curiosity at Palomar College, and am part of a new project that seeks to utilize the latest advances in technology, including artificial intelligence, to enhance the student experience.”

Students who were in attendance had a mixed response to Pepper, but generally seemed enthused by the robot.

“I thought it was really cool,” said Palomar Student Shelle Lee. “It’s big for community college students I think, because a lot of universities they already have a lot of funds … but for students that come here, they don’t have the same opportunities as them. So for [Palomar] to do something like this, and to try their best to invest money for us to have these different programs is really admirable for the community here.”

However, another student, Noah Reynolds was more skeptical of Pepper. “I don’t know how useful it is going to be at this stage,” said Reynolds. “It seems to me right now that you are getting the same thing from Pepper that you would from Siri or Microsoft Cortana… I think it’s cool but it’s a little overpriced.”

Currently, the Palomar College Administration has purchased two Peppers, one for the San Marcos campus and another for the campus in Escondido, each costing $25,000. The money used to purchase both Peppers also includes services being provided by AI Campus Solutions, which is in partnership with Palomar College for the next three years and will be providing a majority of the software upgrades.

“I think that from an interactive perspective, you actually do get to ask and hear responses, whereas on a tablet you are just reading or typing,” said Gonzales. “So It will be interesting to see whether students engage with it differently than they would with a tablet.”

The money for Pepper came out of the Student Success and Support Program which is allocated over $1 million every fiscal year. According to Gonzales, each Pepper would generally cost around $50,000, but because Palomar is acting as a test site for Pepper, the college received it at a discounted rate.

Palomar Student Hannah Lopez, who was also in attendance at the launch event for Pepper, is one of several students who expressed concerns about the cost of Pepper. “I think it’s a waste,” Lopez said. “If I saw a bunch of those rolling around campus I’d be weirded out.”

President of Instruction, Joi Lin Blake said she expects that there will be some students who are skeptical at first of what Pepper has to offer, but also that it is just part of the natural process of adapting to new technology. “Think about the microwave, ‘oh no it’s changing the chemical composition of broccoli,’ but guess what, almost every household has a microwave,” Blake said.

Depending on the success of the Peppers currently installed at Palomar, Gonzales is open to possibly purchasing more for the North and South centers.

If you would like to meet Pepper, Palomar College has a spot designated on its website at www.palomar.edu/artificialintelligence, the site will be updated to show where Pepper will be making appearances around campus.

“When you think about innovators, typically they go first, and then they test it out, try it out, and then other folks get on board. Somebody has to go first so we figured might as well be us,” Blake said. “Palomar has a reputation for being innovative, and for being a leader in community colleges, so we want to continue that reputation and that trend.”