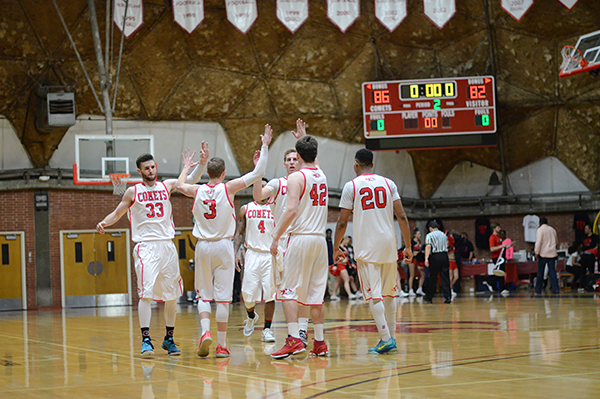 The Palomar men’s basketball team gave its fans a little preview of what to expect for the regular season.

The Comets held a scrimmage at the Palomar Dome against the San Diego City Knights and the Saddleback Gauchos on Sept. 29. The Comets held it down and won against both teams.

The Palomar men’s basketball team’s display gives hope for the upcoming season as they went 4-0 in its showcase at the 2017 So Cal Fall Juco Jamboree, playing against non conference teams on Sept. 15-16. They remain undefeated as they head into regular season.

“We’re a little bit ahead of everyone at this point…the way we’re playing though is very encouraging,” head Coach John O’Neil said.

Last season, the basketball team fell short with a disappointing 11-16 record. The team consisted of all freshman players except one sophomore.

Having a young team drastically impacted the Comets’ level of competition. The Comets now have four sophomores returning for the 2017-2018 season.

“They struggled last year as freshman…[but] having the experience makes a world of difference,” O’Neil said.

The new roster will also consist of players that red shirted last year. The addition of the previous players serves as a benefit and a positive impact for the season since they are fully equipped and already familiar with the team.

One of the hiccups the Comets suffered from internally last season was the lack of team chemistry.

“We had too many egos, too many people thought they were the man…everybody thought they deserved to score,” returning sophomore LaVale Coleman said.

The team this year however has taken a 180 degree turn in mentality by placing their egos to the side to come alongside each other as a family.

“It just feels like more of a family, people feel more connected to the team. It’s more fun to play,” Coleman said.

Chemistry will be the main ingredient for the team’s success this season.

“Chemistry is everything because it shows a level of trust,” O’Neil said.

A new addition to the roster, Matt Meyers, is forecasted to impact the team greatly this season. Meyers is a transfer student who’s been in the U.S. Army.

“He’s older, he kind of takes over, he’s…that leader…on the court. The guys really listen to him,” O’Neil said.

O’Neil added that shooting guard Jackson Strong is another player to keep an eye out for this season. He was a leading three-point shooter in the state last year.

“We have a lot of talent, I’d expect to go far and do something this year. I expect us to be in the playoffs…I think we should win our conference and do everything we thought we couldn’t do,” Coleman said.