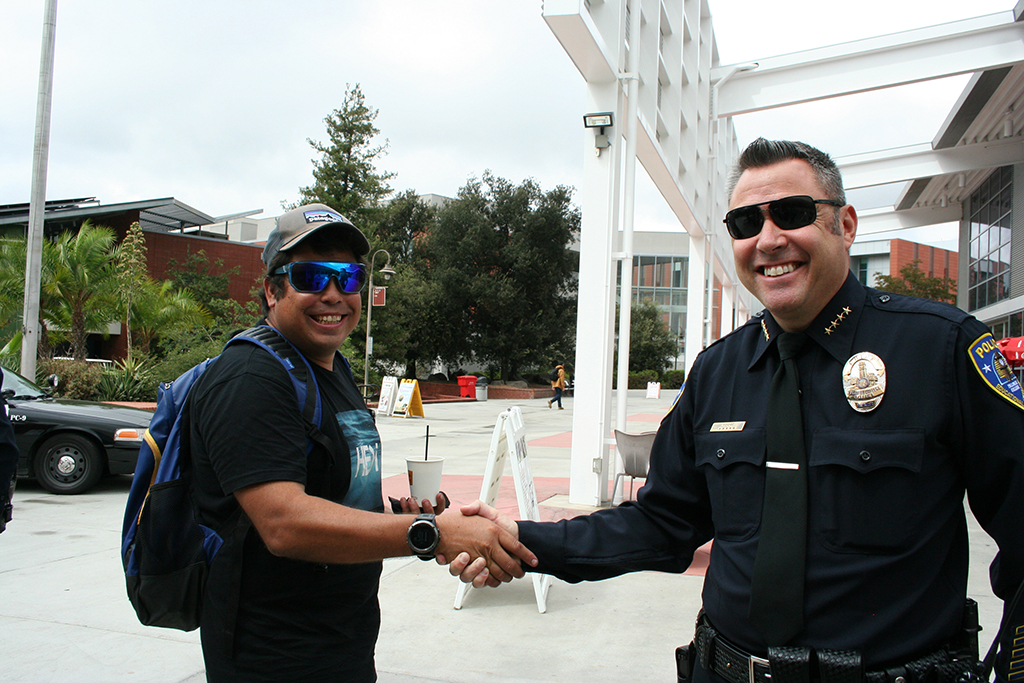 The new face for the Palomar Police

A new man in blue has taken up the badge for police chief.

“My wife and I were kind of looking to start another chapter of our life,” Moore said. “We liked southern California, and as I was looking to leave Phoenix, Palomar came open” said Moore.

He began his journey much like the rest of us, at a community college in Mesa, Arizona. He earned his A.S. in Criminal Justice there while working for the campus Public Safety Department as a community service officer, “much like what we have here on campus,” Moore said. Following his degree, he was hired by the Phoenix Police Department (PPD).

He worked as a patrol officer, responding to 911 calls, later moving into a police academy position as a basic training sergeant. He was sponsored by a community college, and became an adjunct faculty member of a college through that.

From there, according to Moore, he handled “every crime known to man.” He worked a number of assignments, from plain-clothes jobs, and detective work, and was eventually promoted to lieutenant.

During this time, he supervised areas of the city ranging in population from “250 to 500,000 people” he explained.

He also returned to college to further his education while with the PPD.

“I was fortunate during that time,” he says, “the city of Phoenix had a really good tuition reimbursement program.” Moore utilized the program to achieve his Bachelor in Political Science from Ottawa University, and later, his Masters of Administration and Leadership from Northern Arizona University.

In May 2016 he retired from the PPD, and joined Palomar College’s police force as a sergeant the following month.

Chief Moore welcomed the position, and felt a connection to the campus. “Being a product of the community college system, having children who have attended community college, it allows me to relate to both the students and staff,” he said

He stressed that the department’s first priority is the students. Using methods of “relationship-based policing,” he hopes to not only serve and protect the student community, but also help solve issues such as campus traffic and parking.

“This is a very safe campus,” Moore said. He explained how the department does everything from jumpstarts, finding property, and walking students to their cars to investigating major crimes.

His department is comprised of around 50 staff members, approximately 35 of which are part-time student workers on campus. Moore expressed his appreciation for working closely with students on his team. “I get to see the campus through their lenses at times, and the challenges that they face,” he said.

His staff similarly expressed their appreciation for Moore’s leadership skills as well.

“Chief Moore is fully invested in Palomar and making it a great place, not only to work, but also to learn and get your education,” Sergeant Mike Maines of the Palomar Police Department explained.

“It’s a great place to work,” Moore smiled, “the college and the district have been very supportive.”