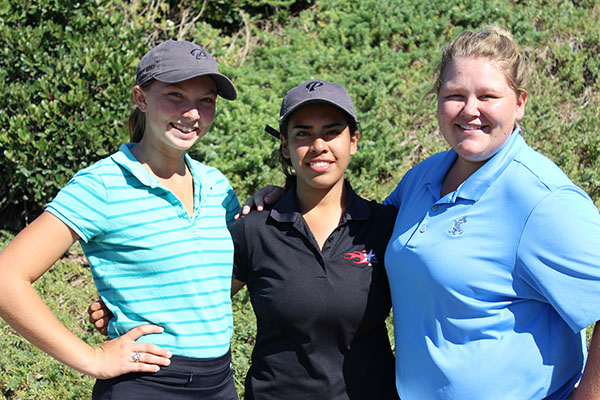 Victoria Owings, 18, graduated from Sheridan High School in Wyoming and is now studying to become a nurse.

Being from Wyoming, there’s not much opportunity for practicing and competing in the cold, snowy weather, so Owings came out to San Diego to enjoy the warmer weather for a bit.

She joined competitive golf when she was 11 years old, but started golfing the moment she was able to hold a club. Owings loves golfing because it can get very intense, especially if you’re the competitive type.

Owings has three mentors. Her first mentor was her dad because he always pushes her to be better and to put her best effort into everything she does. Her other two are Lexi Thompson, because she became a professional golfer at 13, and Kim Kaufman, because she came from a small town just like Owings, which gives her hope for herself.

Outside of golfing, Owings likes to listen to music, especially country, and enjoys to read and write.

Her pet peeves include when people chew loudly, walk or drive slow, try to talk over you, and when others think they’re better than you.

In the future, she hopes to move back to Wyoming to settle down as a nurse, and if not, she wants to become a traveling nurse.

She still hopes to play on some professional tours after college, but if not, golfing will always be something she’ll continue to do for fun. Owings also wants people to know that golfing is not as boring as it seems

“If you’ve never tried it, you have no clue,” Owings said.

Michelle Delacruz Luna, 19, graduated from Vista High School and is in her second year at Palomar, majoring in Psychology and minoring in Art History.

She is from Oceanside, but her family continuously moves around. She had never played golf before college and chose to join the team because she thought it was the most interesting sport.

Her favorite part about golfing is the views she gets on the golf courses when she’s playing.

When getting ready for a game, Delacruz Luna likes to warm up separately so that she doesn’t get intimidated by other players.

Outside of golf she loves art and is currently assisting a tattoo artist, because she’d one day like to open her own tattoo shop.

She doesn’t have a favorite music genre and listens to everything, from rap to jazz to classical music.

Delacruz Luna also has a twin brother who goes to MiraCosta College. She says they are very different from each other.

Something no one knows about her is that she has a shrine to Rick and Morty, a cartoon that airs on Cartoon Network.

Her pet peeves include when people burp and they don’t say “excuse me” and her favorite food is anything that has noodles in it.

Her mentor is her mom because she is really strong.

“Stop watching tv, because the golf channel is boring, but when you get out there it’s a lot more exciting,” Delacruz Luna said.

Vendella Lunde, 18, is beginning her first year of college as a freshman playing golf.

Lunde’s experience playing the sport goes back to when she was just 4, when her father took her out to play.

Now, 14 years later, she continues playing and finds it to be a challenging, mental, and honorable game.

When Lunde isn’t playing golf, she focuses on her studies and family life. Her family raised her with horses and country music.

Having been homeschooled until coming to Palomar, she has been pushed to adjust to balancing family, work, school, and golf, all together.

Her current goal is to go professional with golf, however if that plan doesn’t quite work out she hopes to put her business major into use.

As an athlete, Lunde has noticed that golf attire isn’t the most flattering for women. She likes to wear crazy knee-high socks with her golf attire to add more personality to her uniform.

She dreams of starting her own women’s golf clothing line to allow female players to express themselves more colorfully.

Lunde hopes to have fun, try her best, and successfully balance golf and school.

Abby Corona, 45, “the unofficial team mom”, according to Coach Halda, is in her 15th year playing golf socially.

Corona grew up in Otay Mesa, San Diego and attended Southwest High School. She has been working at Palomar College as the Secretary for both the Chemistry and Physics & Engineering departments for 12 years.

When it comes to playing golf, she loves the difficult and challenging environment it offers. She finds the bright green, outdoor courses to be beautiful.

She enjoys the variety that golf has to offer. Every shot, every club, and every course is different in it’s own way, according to Corona.

Outside of golfing, she enjoys listening to old-school dance tunes, classic rock, and jazz.

Corona hopes to improve her skills in golf, become the best golfer she can be with the support of her team, and enjoy the experience.

When first starting off, she was a bit nervous to play but did not give up and was inspired by her teammates and her daughter Alyssa.

Coach Mark Halda was born in Modesto, California and has lived in Del Mar since 1968.

He was part of the first graduating class of Torrey Pines High School, but didn’t start playing golf until after college. While he would enjoy hitting golf balls outside of school, he competitively played football, basketball, baseball and volleyball at Torrey Pines.

He has been coaching the men’s golf team for 11 years and the women’s team for 4 years. He chose golfing because he loves the lessons that it can teach and it’s the most mentally challenging sport.

Besides golfing, Halda likes to do “anything that has to do with a ball.” He also enjoys listening to music and going to the beach.

He has two sons, age 33 and 30, and his oldest son currently has a baby girl on the way, which Halda is very excited about, especially because she’ll be the first girl in the family.

Coach Halda did not wish to be photographed.