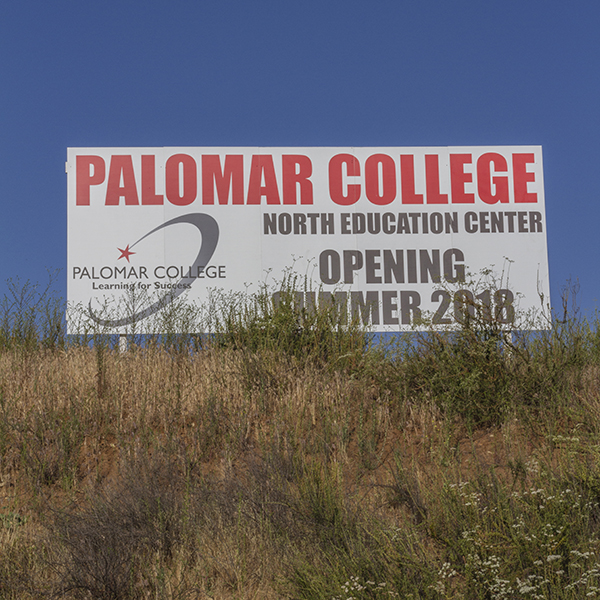 After a five-year hiatus, construction is underway in Fallbrook on the second of two education centers planned for the district just 18 miles north of the main campus.

The 85-acre parcel of land that sits right off State Route 76 and Horse Ranch Creek Road will be the home of Palomar’s North Education Center. The college district’s northern campus will open in summer 2018 to coincide with the opening of the South Education Center in Rancho Bernardo.

The land, which was purchased in 2007 as part of the 2006 voter-approved Proposition M, a construction bond measure. The land sat idle after the construction of the 2-mile connection Horse Ranch Creek Road because of budget constraints and legal disputes.

“The board wanted that facility open, it was just sitting there and I figured a way to do it,” President Joi Lin Blake said on jump-starting the construction of the center to increase student enrollment and meet the needs of the district’s northern students.

The center will open with modular units, portables, while the first phase of the permanent campus is under construction, said Daniel Sourbeer, vice president of Instruction.

“We don’t really want to go modular there, but we feel like we need to go with a modular campus there within the first year while we’re building out the permanent campus. That way people will see this is a temporary campus,” Sourbeer said.

What is now a hub of bulldozers and excavators was formally a battleground between the college, the county and the San Luis Rey Band of Mission Indians.

In 2012, while Horse Ranch Creek Road was under construction, 16 ancient burial grounds and artifacts of the Luiseno were lifted from the earth. Merri Lopez-Keifer, chief legal counsel and tribe member of the San Luis Rey Band of Mission Indians, said that because of this the tribe filed a temporary restraining order against the college because of this desecration.

The case was settled outside of court said Lopez-Keifer but the Luseno community would still like the college to acknowledge the land that the center resides on. The site is known as Tomkav, “gathering place,” to the Luseno and Lopez-Keifer said that it would make an ideal name for the center’s student learning center to introduce the concept.

Professor Patricia Dixon, department chair of the American Indian Studies Department, is working as a liaison for the college and the nine tribes within the region–four of which are Luseno–to renew their relationship and partnership.

“They said they kind of want a ceremony of assurance, that the college will honor the indigenous people of the area of the land,” Blake said.

Dixon will meet with the tribes within the coming weeks as it is their hope that they could reach their goal of ensuring that the tribes are recognized for the harm the college has done and that the college won’t engage in such activities again.

“We would like everyone to understand this is a struggle that is continuing… that Tomkav was treated with such disrespect initially by the college that we would like the college and its students to realize that this was an important place for all of us because it was meant so much to the first people… and truly a gathering area,” Lopez-Keither said.

While the tribes will meet over the summer to establish closure of the events in 2012, the college will establish course schedules and staffing for the 2018 opening the following year.

Sourbeer said that the center would look to accommodate 500 full-time equivalent students that first summer session and then grow to more than a thousand the coming years.

Potential course offerings will include a core of science courses along with the possibility of science-related, agro business courses and the relocation of the college’s public safety program, which includes the Police Academy, Fire Academy and Fire Technology program.