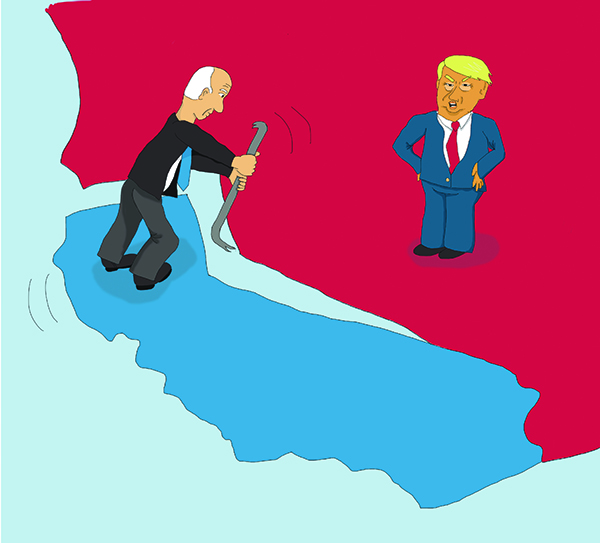 Is secession the best for Californians? (Pro)

California’s succession goes much deeper than a perceived rash severance from the binds of the Constitution due to a Republican administration taking over.

A common view shared beyond California’s borders is that our country is taking a huge step back with regards to social progress, environmental protection, and capitalist corruption. A Californian succession (CALexit) would promise that faith and hope for a revolutionary future is concrete.

I believe this is a bold move for progressive thinkers with values that don’t align with a conservative political party.

Until a succession happens, California must follow procedure. Leaders behind the “Yes California” campaign have over 8,000 volunteers throughout the country trying to rack up the 585,407 signatures needed for placement on the March 2019 ballot.

“Yes California” will give us official acknowledgement of our already existing independence. According to Business Insider, California has the sixth-largest economy in the world, making us more powerful than France with a larger population than Poland.

CALexit means our taxes don’t go straight to the federal government with very little to no signs of return. A succession means we can look forward to beautiful schools, airports, roads, and highways; all forms of infrastructure would be gentrified and new. We can also use this money to further scientific research to the benefit of our people and planet.

Not being a state but a country means we’re no longer associated with a mass of hateful people who discriminate against others based on their religion, skin color, or sexuality. We can keep our laid-back culture that embraces diversity and enjoy our freedom without red-state ideologies taking over; especially with their joke of a leader polled as the most unpopular president in all of American history.

It’s time to revolutionize our government, policies, and laws. CALexit is a great start by breaking away from a corrupt system to create a world that honors a more liberal way of life.

California as a country means we don’t have to be a part of the greed-lust of the wealthy elite and their puppet politicians who are willing to provoke wars and kill masses of innocent people to advance capitalist agendas. This gives us the opportunity to create a better and stronger humanity, instead devolving and acting like primitive barbarians who conquer other country’s territories for their resources.

We can establish a government of integrity that promotes world peace and respect for other cultures. Also, this next one’s especially important, as observed by a world-wide participation in the Women’s March: CALexit means we can keep our reproductive health care system and rights.

I want to live in a country that reflects my values and beliefs. California as a country will be a haven for Americans who don’t have their head up their asses regarding the dire corruption of our nation and the toll it’s taking world-wide.

I will vote in favor of CALexit so we’re no longer guilty by association. Until that day comes, I’m an embarrassed American and a proud Californian.