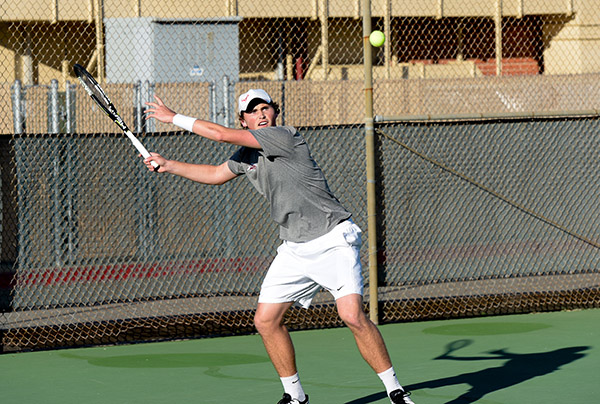 Sophomore Peter Trhac returns this season as the top player for the Palomar men’s tennis team.

In his freshman year, Trhac was the Pacific Coast Conference champion for singles and doubles, and returned for his sophomore season to defend his title on the the court.

Coach Ronnie Mancao believes that Trhac has a strong mental ability to make decisions and execute them when he is out on the court.

“He has what I call the edge,” Mancao said.

That edge, paired with his agility, is what has caught the attention of Idaho State University, whose staff have offered Trhac a scholarship once he’s ready for transfer.

Trhac got his start in playing tennis when he was around age 6-7, and he hasn’t stopped since.

“My dad was big fan of tennis, playing it recreationally, and he got me into it as a kid,” Trhac said.

He’s also the head co-captain of the team, a role he takes very seriously.

“I wanna be a good example for [teammates] so they can pass it on [to future players],” Trhac said.

Trhac not only has the support of his coach, but of his teammates as well.

“He’s a strong leader,” 19-year-old co-captain Dean Vo said. “He’s good at helping other [teammates], giving them tips to help them out.”

Currently, Trhac is paired with 19-year-old freshman Kyle Le for doubles matches, and the duo has so far won 15 out of their 17 matches together this season.

For Le, a match up the two had against San Diego Mesa was one of the most memorable ones they’ve had so far in the season.

Le attributes the pairs strong record to Trhac’s leadership on the court, and the chemistry they have as a team.

Before matches, Trhac performs rituals that he feels prepare him to compete.

“I like to have fresh strings in my racket,” Trhac said, noting that he also knots them a particular way.

Trhac also insists that the first ball he touches during a match is the same ball he’ll use for his first serve. Trhac’s favorite type of serve is a left-handed kick serve, which he says is his “bread and butter.”

On April 15 Trhac took first place in singles at the Pacific Athletic Conference tournament. Trhac, who also won the title in 2016, defeated Kimo Barrere from San Diego Mesa 6-1, 7-6 (7) in the championship match to retain his title as PCAC champion.

Next up for Trhac and his teammates is a trip to Ojai, Calif. for the Southern California Regionals and the CCCAA State Championships April 27-30.