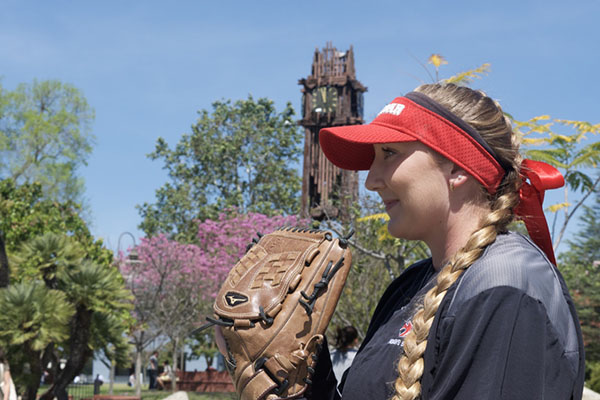 Softball ace strikes out the competition

Palomar softball has been heavily relying on a freshman pitcher this season, and will continue to do so as the pressure builds approaching the state playoffs.

Crystal DesLauriers, who has been dominant on the mound for Palomar, is leading the Comets pitching staff this season with a record of 12-1.

Born and raised in San Diego, Deslauriers graduated from Mission Hills High School in San Marcos in 2016. Softball Head Coach Lacey Craft helped to recruit Deslauriers to Palomar that fall, and has nothing but confidence in her new star pitcher.

“Crystal has stepped into a big role for us this year,” Craft said. “We knew she had a ton of potential.”

The Comets are currently 9-0 in conference and are sitting in first place in Pacific Coast League play. The team has shown an ability to win close games, with DesLauriers being called upon often to close games out and ensure victory.

DesLauriers hopes to continue helping the Comets with her success and determination, and to ultimately lift the team to their goal of a state championship.

“I feel like we’re finally starting to come together after a rough start,” DesLauriers said. “I’ve grown a lot since high school and it’s helped me become a better pitcher and teammate.”

While her season numbers have been strong, it’s her performances during conference play that stand out. DesLauriers has been nearly unhittable against opposing batters, amassing a staggering 39 strikeouts in 26 innings pitched while boasting a 0.54 ERA. DesLauriers uses an overpowering fastball to average 10.5 strikeouts a game, which is the second highest in her conference.

While maintaining a high level of play, Craft believes that with consistency, the possibilities for the team with DesLauriers are endless.

“What we want from Crystal is consistency. Some of her pitches are really advanced for this level,” Craft said. “I’d like to see her go right after hitters because she has the ability to really dominate a lineup.”