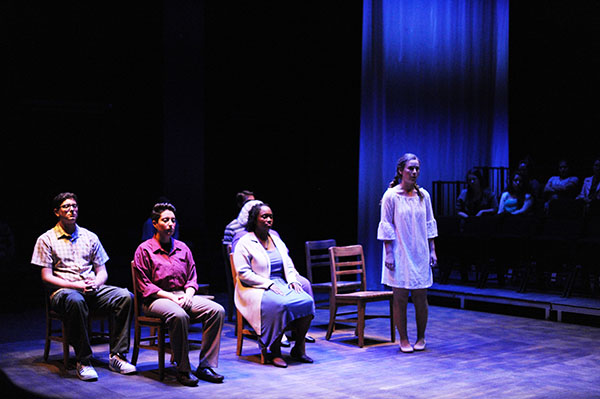 The lack of diversity in theatre needs to catch up to 21st Century standards.

Before the rise of prominent names such as Misty Copeland, the first African-American female principal dancer at American Ballet Theatre, and iconic musicals such as Lin Manuel Miranda’s “Hamilton” and “In the Heights,” which featured strong black and Latino casts, the theatrical industry had always been dominated by white performers, where they were more than likely casted in important roles compared to their minority counterparts.

It seemed that in the western culture, the general archetype of a great playing cast should be played by white performers, leaving minorities with limited chances to book jobs despite years of arduous training.

Joei Waldron, an African-American dancer and the director of Axxiom Dance Collective based in San Diego, commented about discrimination in the dance industry.

“People like myself and other minorities get excluded from this particular group. So yeah, I actually do feel that I have been discriminated against because of my ethnicity,” Waldron said.

Some would try to justify racism in the dance industry, such as ballet. In an interview with Pointe Magazine in 2014, Rachel Moore, executive director of the American Ballet Theatre, stated “There are people who define ballet in a very specific and historic sense, and think it should look like the Mariinsky in 1950.”

She then continued, addressing questions regarding African-American bodies not being suitable for ballet saying, “I’ve heard from the mouths of dance professionals that black dancers categorically cannot become ballet dancers because they don’t have the right body, I think that is an incredibly unfortunate myth that still exists.”

Rickey Renee Richardson, an African-American dancer, has experienced this type of discrimination first hand in his auditions.

“In the dance industry and in the performance industry, a lot of audition calls are type cast or race cast.

“They will specifically say that they were looking for somebody that has a lighter skin complexion and we’re not looking for someone of your look,” Richardson claimed that individuals with his complexion would be put into a stereotyped based character where auditions have urban or hip hop in the name, regardless of their training.

Richardson elaborated on the most notable factor with the dominance of white casting by explaining:

“There is something that is recognized as beautiful from a blanc canvas and people assume that a blanc canvas has to come in as white or caucasian, which is not true.”

Aside from the dance industry, the theater and movie industries are guilty to discrimination as well. It has been shown over the years that professional shows and Hollywood movies have casted white actors playing as minority characters.

“Latino actors were willfully denied the opportunity to audition and play the roles that were explicitly written for them in my play. This was not an ‘artistic choice’ to go white and younger with these roles-and if it was, it was a terrible, exclusionary choice that goes directly against the logic of the script.”

Stephen Adly Guirgis wrote on a Facebook post reacting toward white actors as lead roles on his play “The Motherfucker with the hat,” despite it being originally written as Puerto Ricans.

The amount of under representation of minorities in the theatrical industry is certainly a problem, because all groups of people deserve a significant portrayal in the works of performing arts.