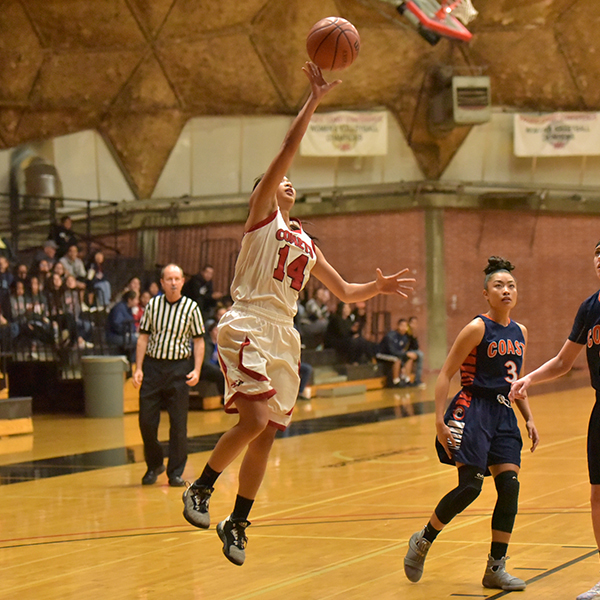 For sophomore basketball player Roshell Lamug, juggling a job, over 20 units of schoolwork and a spot on Palomar College’s basketball team has been the norm for the last two years.

A leader on the team, Lamug’s hard work is paying off, and she was recently chosen by coaches as the Pacific Coast Athletic Conference North Division player of the year, along with selections to first team All-Conference and second team All-State.

Lamug, who began playing basketball at the age of 8 to be like her older brother, was humbled by the selection, and is using it as motivation to improve on the court.

“When I got it, I didn’t even see myself getting player of the year, and I told myself I need to start playing like it, acting like it,” Lamug said.

Head Coach Leigh Marshall said she believes she deserved it, as do the other coaches and players on the team.

“She’s a great leader by example,” Marshall said. “Everything she does, she does it to the max.”

Teammates Cheyenne Ertz and Monica Todd described Lamug as an unselfish leader of the group who is also different.

Todd, who has known Lamug since she was 6 years old, described her leadership style as less vocal than what may be considered normal.

“She doesn’t really talk, but we don’t need that,” Todd said. “Everyone thinks that if you’re a leader, you have to talk, but she’s a role model…to see her on the court… I need to do what she’s doing because she’s getting where she wants to.”

Lamug acknowledged she knows she’s crazy for being able to keep up with her busy schedule, but has taken on the workload regardless and is highly motivated to succeed.

“I definitely don’t get as much sleep as others, but it’s a lot of time management,” Lamug said. “I see others around me, what they demand of me … so I set the standards of … I should be able to do this.”

Lamug is in her last semester at Palomar and will be transferring in the fall. She doesn’t have a top choice, but would like to stay in California and plans to major in bio-engineering while continuing to play basketball. CSU Chico and Humboldt State have both expressed interest in having Lamug play for their schools.

Coach Marshall believes Lamug will excel in wherever she chooses to go, on account of her dedication on and off the court.

“She’ll be here until 10 o’clock in the library studying,” Marshall said.

For now, Lamug wants to enjoy her time before she transfers. During spring break she plans to go on a road trip to Northern California to look at the different campuses she has applied to. The self-described “adrenaline junkie” also wants to go skydiving.