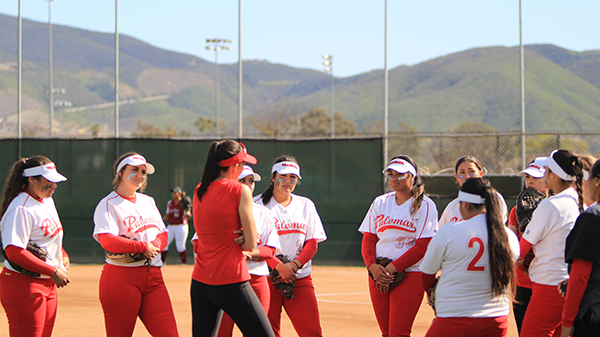 The weather isn’t the only thing heating up in these early days of Spring, as Comets softball pushed their winning streak to seven games while enjoying a 11-3 win on March 3 over the Knights of San Diego City College.

In their first 12 games this season, the Comets are hovering around a .400 team batting average. Such success would be difficult to sustain for the remainder of the year, but Head Coach Lacy Craft’s expectations are clear.

“If we focus on getting better every day, usually that will result in more wins. We’re still hunting our goals down daily,” Craft said.

Starting on the mound for the Comets was Moriah Lopez, who went three innings and gave up three unearned runs on three hits. Lopez was a victim of defensive mistakes in the game, which lead to the runs being scored in the second and third innings.

Comets freshman utility player Tiare Paopao ignited the offense early, launching a three-run, home run in the bottom of the first. Through four innings, the Comets built a 10-3 lead, as the Knights were unable to disrupt their timely hitting and base running.

In the fourth inning Comets freshman pitcher Crystal DesLauriers came in to relieve Lopez and finished the game. The Knights from San Diego City had no answer for DesLauriers’ overpowering fastball, She struck out the side in every inning she pitched to finish the game with nine strikeouts.

“I think we did good, but I do think we could have done better,” DesLauriers said after the game. “Hopefully we omit the errors and are able to communicate more in the future.”

The Comets offense picked up again in the bottom of the sixth, scoring run 11 off a two run single by third baseman Samantha Smith which ended the game by way of the mercy rule.

The Comets are now 8-4 on the year and 2-0 in their conference, and though morale is high, Craft isn’t satisfied.

“I think we had a good game, but we’re still putting it together. We had a few errors that cost us some runs,” Craft said after the win.

A convincing conference win keeps the Comets rolling, as they work their way through a season in which the team has set lofty goals for.

“We want to go undefeated through conference like last year and ultimately get to state and kick butt there,” sophomore utility player Brienna Dunckel, who had three stolen bases and three runs on three hits in the game, said.

The Comets look to continue their strong play with their next home matchup coming against the Imperial Valley Arabs on March 17 at the Palomar College softball field.