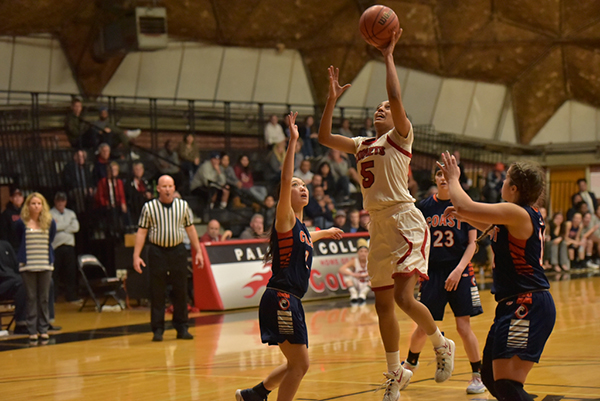 The No. 5 seed Palomar women’s basketball team played a familiar opponent in its second round matchup of the Southern California Regional playoff.

On Feb. 24 at the Dome, the Comets defeated the No.12 seed Orange Coast Pirates in an 80-77 nail-biter, for its fourth win over the team this season.

Palomar’s head coach, Leigh Marshall, was happy to come away with a victory but was disappointed with her team’s effort.

“Defensively, our intensity was really low. . .they [Orange Coast] probably deserved to win this game. That’s the fourth time we’ve played them, and we’ve beaten them by 20, 30 something and 50 … we played bad,” Marshall said.

In the first quarter, the Comets fell behind the Pirates 15-4 due to some sloppy play and lack of execution. A fired up Marshall called a quick timeout and delivered a highly passionate speech to her players.

“She was super disappointed in us because we weren’t playing to our potential,” said Kendall Crosby, freshman forward.

The Comets responded to their coach by reeling off five quick points to end the quarter on a 3-pointer from Ariana Hernandez, and a steal by Roshell Lamug that led to a basket by Allie Israel.

In the third quarter, the team’s offense became stagnant again and suffered some defensive breakdowns on 3-point shots by the Pirates. Palomar trailed 60-59 at the end of the quarter.

Sophomore guard Regina Sheffield said the team wasn’t focusing and communicating with each other on the court.

The Comets started the fourth-quarter on a blazing 13-5 run, behind some tough interior play by Sheffield and timely 3-point shooting by Hernandez and Lamug, who was only 1-7 shooting in the game, but came up huge in the fourth.

In the final moments, Crosby would nail her seventh 3-point field goal of the game with 32 seconds left to give the Comets a 76-72 lead and seal the game.

Crosby, who finished the game with 23 points, said with a smile on her face, “I just let it fly basically. It felt awesome, but my teammates got me open, and it was all them.”

For Palomar, Sheffield followed Crosby with 13 points and seven rebounds, while Lamug dished out eight assists.

Sarah Nunes led the Pirates with 18 points, and Cheyann Pendergrass had a great game with 17 points, six rebounds, and eight assists.

Marshall, who was an assistant coach at Orange Coast for five seasons and played on the 2003 state championship team, said it was hard to knock her old head coach, Mike Thornton, out of the playoffs.

“He’s like a second father … Its hard to play each other, because I root for him against everyone except the Comets,” Marshall said.

Jokingly, Thornton said that it is harder for him, because she is “something like ” 7-0 or 8-0 against him. “I stopped counting,” Thornton said.

He also added that Marshall is a “special coach,” and Palomar is lucky to have her.