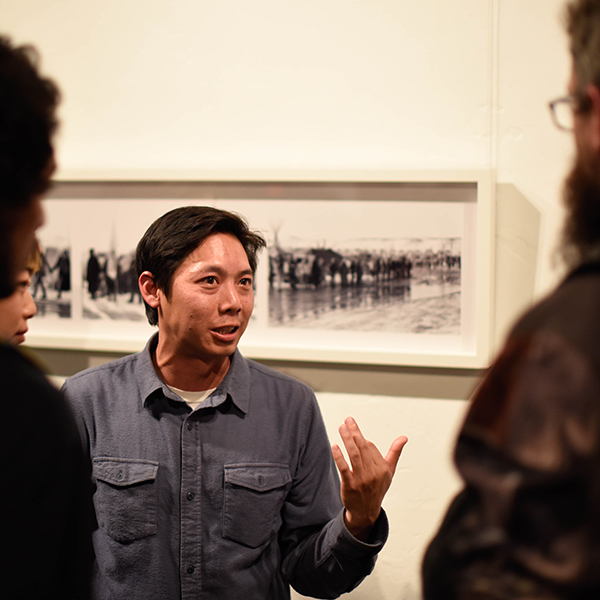 A Palomar alumnus gives a face to Standing Rock protesters in photo exhibit.

Johnny Nguyen’s photo exhibit “And If I Can Show You, You Would Never Leave Her” is on display through Feb. 26 at the Hill Street Country Club in Oceanside. The three-day photo journal examines the people and conditions of those protesting the Dakota Access Pipeline (DAPL) at the Standing Rock Indian Reservation.

“This is life and death for me,” Nguyen said of his need to address social issues and his trip to the reservation in North Dakota in December.

Nguyen’s photo journalistic instincts kicked in and within 24 hours he had bought a ticket and boarded a flight to see first hand what the protests were like at Standing Rock and how he could help.

“When I first arrived I saw an eagle fly above me and it was really beautiful,” Nguyen said. “It was almost like a connective feeling with nature recognizing what the people at the camp was actually doing.”

The DAPL threatens the burial grounds of the Lakota Sioux Indians and the water in Lake Oahe and the Missouri and Mississippi Rivers.

“You can’t help but cry when you see the river,” Nguyen said.

Cait Kozuma, 23, said the exhibition was both incredible and powerful to look at and absorb.

“I was tearing up looking at them just thinking about all the things people have gone through,” Kozuma said.

As soon as Nguyen entered the camp however he was met with 30 mph winds and blizzard like conditions. Images on display capture the below freezing temperatures such as a depiction of a middle-aged woman in a parka amidst a flurry of snow and signage displaying the warning stages of hypothermia.

Sergio Soares, 26-year-old Palomar student, said he came out to the event to hear a first hand account of the protests at Standing Rock than the news flooding his Facebook page.

“I got out of work to come here. I wanted to come and see this,” Soares said. “I need to make money, but this is more important to me than money.”

The swiftness of which Nguyen sprung into action and flew to Standing Rock was doubled two fold as he quickly sought a gallery to exhibit his photo journal on his arrival home.

“It was required,” Nguyen said. “Things are changing so quickly, everyday there’s a new development. I worked on the clock to get this out.”

His need to display his work and the inherit immediacy of photojournalism news, such as his work, was due to the inclination of people to quickly forget about one trending topic and to move on to the next he said.

Nguyen’s girlfriend Yang Jaing, 28, said that Nguyen has always been a part of movements and protests since the Occupy Movement in 2011. Jaing adds that his passion for social justice is inspirational and that he has taught her that getting involved can be more than marching but also through conversation and photography.

“Another thing that he has really taught me is that it’s enough to first just let yourself be moved by what’s happening,” Jiang said. “Action is great but letting yourself first be moved and touched is already important enough”

The best way to help the grass roots movement is to donate to the Water Protective Legal Collective Nguyen said. He added that the company in charge of the construction of DAPL, Energy Transfer Partners, tries to ruin the spirit of protestors through legal battles once caught and fined by authorities.

Nguyen hopes that he doesn’t need to return to Standing Rock but said that if it were necessary and needed he would go back.

“We’re fighting a Goliath at the end of the day; root for the underdog,” Nguyen said.