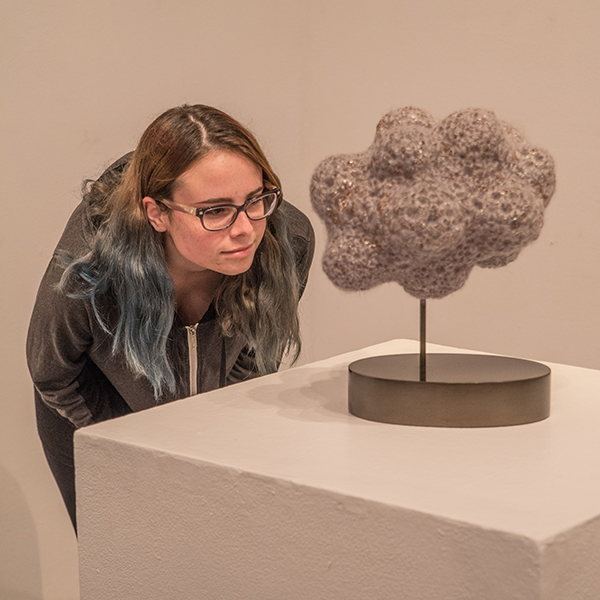 The brilliancy of light refracting off multifaceted glass will take center stage this year at the Boehm Art Gallery.

The second biennial glass exhibition will be on display at the Boehm Gallery through March 7. The “Let the Light In” exhibit is curated by Professor Michael Hernandez and will feature works from glass artists of the Pacific Northwest, more predominantly in Washington.

“The whole idea of the show is to highlight artists that are important to what’s happening in glass,” Hernandez said.

The work displayed in the show were selected to showcase the programs that can be taken at the college such as the hot glass studio and the kiln glass, glass casting, program.

“The pacific northwest is a hub and an important part of studio glass,” Hernandez said. He added that the region is the largest place per capita in the world for glass artists to live.

Ethan Stern, a featured artist in the group exhibition, agrees with Hernandez’s statements and adds that the Pacific Northwest is unique for their glass works because of the large tight knit community located in the region.

Stern will be showcasing two works of his: “Blue Sea Coast” from his Coastline collection (pictured left) and “Crosscut Bronze” from his Crosscut collection.

The inspiration for Coastline was how recognizable the coast is and the interplay of geography, typography and maps with its image.

Crosscut however is directly inspired by “your grandmothers crystal vase,” or cut glass from 1890-1940. Stern said that “most of this brilliant cut glass is actually really ugly” and that he wanted to reimagine it into a way that translated with his generation and his minimalistic aesthetics.

Stern is a glass blower and utilizes cold working, cutting and polishing of glass, in his work.

“Instead of reflecting the light, I’m trying to make these obTjects absorb the light, so that they glow from the inside just on their own,” Stern said.

Stern does this through carving and grinding the glass like wood or clay to bring the viewer in closer to notice its surface.

“Palomar is lucky to have the gallery there and to have a show like this, especially for students who are studying glass,” Stern said. “It gives them the chance to see what’s out there and the potential of what they’re doing.”

Hernandez said the exhibit is meant to display the ways in which their art and work can take shape and provides a professional look at what artists are doing in the industry.

Hernandez looks to make the glass exhibition a rotating regional show where it would eventually feature works from artists on the East Coast.

The inaugural glass biennial in 2015 featured glass artists from Southern California. The conversation for the biennial exhibition began upon Hernandez’s entrance into the college in 2013 and is a direct response to the gallery’s ceramics biennial.

“There is not a huge glass community in San Diego and there really aren’t glass galleries or anything like that, so the ability for students and the community to be able to see work like this is a pretty rare opportunity,” Hernandez said.