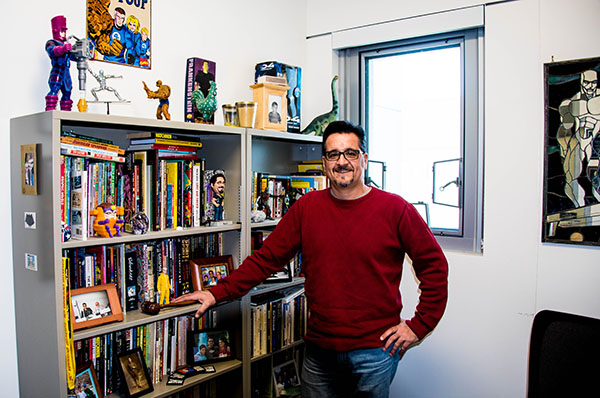 Versaci has been a member of Palomar faculty since 1997 and his first book, an academic study about comic books, came out in 2007. His newest memoir, “That Hidden Road,” was released in late 2016. It covers his cross-country bike trip from Ocean Beach, Calif. to Outer Banks, N.C.

In the book, Versaci also relates his battle with cancer, which developed back in 2003. He was diagnosed with a germ cell tumor, which was behind his abdomen. Though this is the only experience with cancer he talks about in the book, he also later dealt with testicular cancer.

During that first round of cancer, Versaci was not in a place where he could physically achieve this endeavor. “When I was going through cancer I was so weak I couldn’t even go up the stairs without stopping to rest. With the bike it was kinda a goal I had.”

The ride he went on became one of the central themes of the book, as it rekindled both his emotional and physical health.

“Even just commuting here, especially long-distance biking, you spend a lot of time inside your head,” Versaci said. “I mean, you meet people and stop along the way but most of it is just peddling, so your head has to go somewhere and that was a good way to kinda sort through memories and get centered a little bit and stuff like that.”

Achieving physical and emotional health has become an achievement in and of itself for Versaci, but as stated in an article by The San Diego Union Tribune featuring Versaci, he explores the concept of “the arrogance of health.”

When asked further about it, he gave a further definition: “The arrogance of the healthy is most of the time when nothing is wrong with us. We don’t even think about it,” Versaci said. “I mean it’s good to be healthy, but it becomes this kind of bubble for us, and it insulates us from a lot of the suffering that’s happening.”

Ten years later, a week past his anniversary of recovery, Versaci’s health was put up to a new trial: he was diagnosed with a second cancer, this time it was testicular cancer.

That diagnosis came in the fall of 2013 and he recovered by June of 2014. “I had gone for my check up and that was testicular cancer. Then I had four rounds of chemo,” Versaci said. “After the chemo was over I had a major surgery where they took out my lymph nodes. That’s the cancer I covered on the blog.”

Versaci said he does not believe that everything happens for a reason, and things are sometimes random happenings, which include his two strikes of cancer. His family, devoutly religious, believed God may have had meaning in his sickness, but Versaci didn’t see things that way.

“That’s a world view I’ve never had. Plus, it’s my cancer, and I get to say what it means.”

He did not feel that there was a heroic element in his recovery either. “When I talk about surviving cancer I don’t think there’s anything necessarily heroic in that,” Versaci said. “If someone succumbs, does that mean they weren’t heroic enough or something like that? I don’t believe that at all.”

Versaci touches on a multitude of themes in “That Hidden Road,” aside from his health. The title of the book was inspired by the 14th-Century epic poem, Dante’s “Inferno.” Versaci explained that the title, “That Hidden Road,” refers to the emerging from that dive from the depths in epigraph 3, and the stumble upon that hidden road that leads back. “That’s kind of a metaphor throughout the book, finding your way.”

Finding one’s way is a prominent theme both in the memoir and throughout Versaci’s life, as well as recovery. “That idea of rebuilding from the ruins is a very powerful idea for me. The way I write and teach, very important.”

Discovery is also key to the book’s theme.

“I always tell my students that writing is a process of discovery so you don’t always know where it’s gonna end up. It’s the process of writing that gets you there,” Versaci said. “The process of writing was really turning that kind of chaotic experience, not just of the ride but of the past too, into a story that had structure.”

Versaci said that while where he is now in life is peaceful, situations as English Department Chair have not always been so calm. “Just based on recent events I don’t think things will get better for a while. I mean I hope I’m wrong. I mean the woman that just got appointed as secretary of education, she’s spent no time in, she doesn’t believe in, public education. That’s what i spent my whole life and career in. But again, I try to take a long view and not get too wrapped up. You can’t live that way.”

Writing had always been a key aspect of Versaci’s life, even passing on the interest to his son, Nick Versaci of UCLA. When asked via telephone call how his father’s career influenced his, he said: “He’s my biggest editor. Whenever I write something, I send it in to him first to read.”

Though they were young during his first cancer battle, Versaci said that his eldest son had used the feelings he had and didn’t express to his father initially as powerful themes of some of his college essay papers.

Tony Versaci noted that his father’s health issues and his job at Palomar never stopped him from being involved in his two sons’ lives. “He’s really good at balancing everything and not letting one section of his life dominate the other,” he said. “I really appreciate him.”

He also received praise from his book publisher, Kevin Atticks.

“Our manuscript acquisitions team was struck by the strong narration and deep character experiences, combined with the incredibly detailed cartoons portraying those experiences,” said Atticks. “His story is so relatable to middle-agers, many of whom have made snap decisions to temporarily leave their lives behind to explore new things, wrestle with internal demons, only to return a better – if not just different – being. Rocco has been a model for our other authors for how to promote a new book.”

Versaci has one thing he hopes his readers will take away after reading the book, or simply becoming familiar with his story.