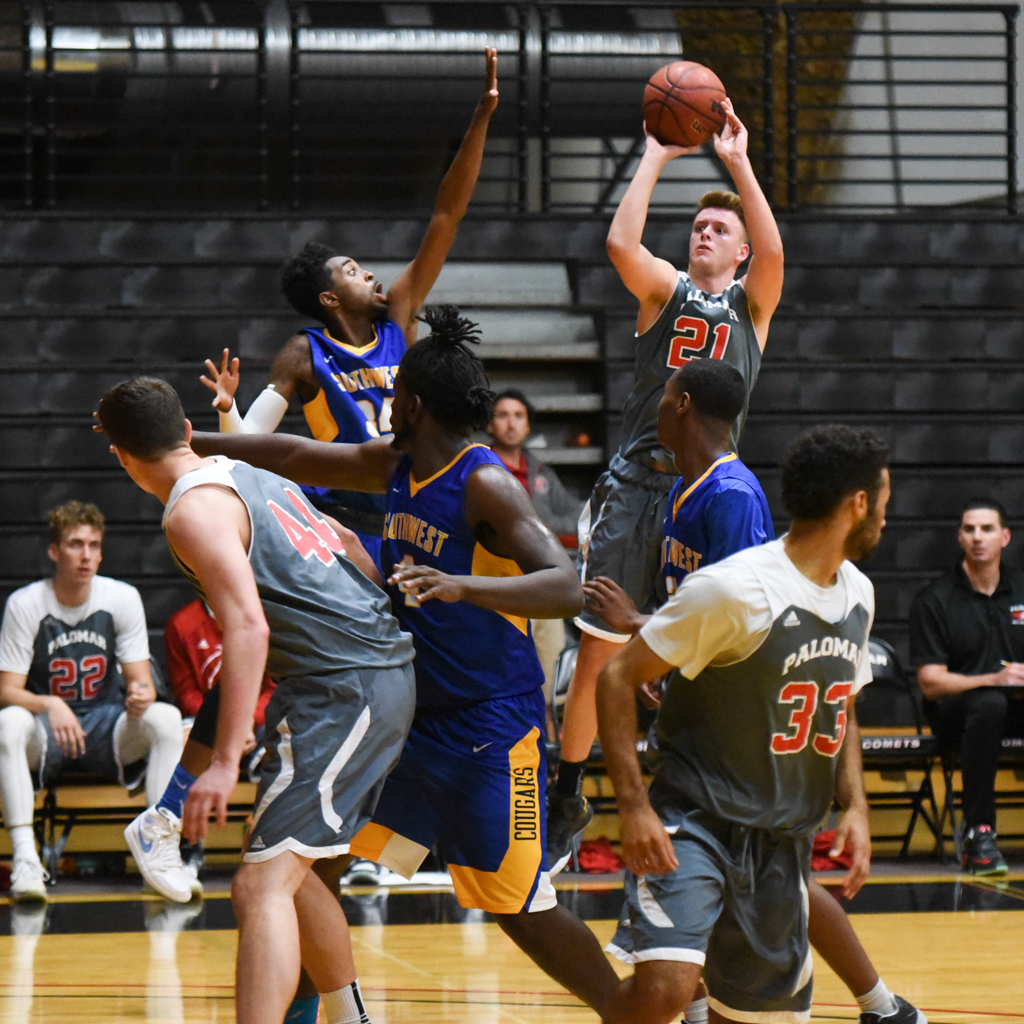 Three-point shooter shines on the court

Jackson Strong is a shooting guard coming out of Torrey Pines High School. Strong, originally from Illinois, started playing basketball at the age of four. His love for basketball started with his father.

“My dad played college basketball. He taught me how to play throughout my whole life, we watch basketball together all the time, and he used to rebound for me when I was a kid.”

After the eighth grade, Strong moved down to California to live with his father. There, he continued to shoot and rebound and joined several “junior dunker leagues” as Strong stated, eventually becoming more serious with the sport as he got older.

“He’s a team player, he moves the ball along, we get along, the whole team gets along. Everyone likes him, he’s really easy to talk to,” team captain Kevin Hardyway said about fellow teammate.

Strong chose Palomar College because it was a familiar court to him. He used to play in fall-league tournaments while in high school at Palomar. There, he would speak to coach O’Neill and coach John Hotaling sometimes.

Hotaling joked about first meeting Strong, “He was a 6 foot 2 inch, kind of chubby kid going into his sophomore year, then I saw him in his junior year and saw a different, fit, strong person.” One thing that Hotaling said was that Strong has always been a great shooter; then and now.

“You miss 100 percent of the shots you don’t take, this is why I shoot the ball all the time, because it’s always on my mind. My coach would tell me I would never find a shot I didn’t like… which is true,” Strong explained his game motto.

Unlike most players who don’t like to have a big meal before playing, Strong has a ritual he does before every game, “I like to eat sushi before the game. It’s not too heavy and I eat it an hour and half before the game. I get the Crunchy Philadelphia Rolls.”

When you don’t catch Strong playing basketball for the Comet’s, you’ll see him at the beach playing beach volleyball, or cheering on his favorite team, the Cleveland Cavaliers, along with favorite player, LeBron James.

With his personal goals being the same as the team goals—winning as many games as possible, he hopes to continue playing anywhere after Palomar.

“Wherever I can keep playing, I want to go,” he said.

Although Strong plans to continue playing basketball for as long as he can, he is currently pursuing a major in psychology, later possibly following his family’s career path in business sales.

You can catch Strong and fellow teammates shooting three-pointers all throughout mid-February. For information on future games and locations, log onto http://www.palomar.edu/Athletics