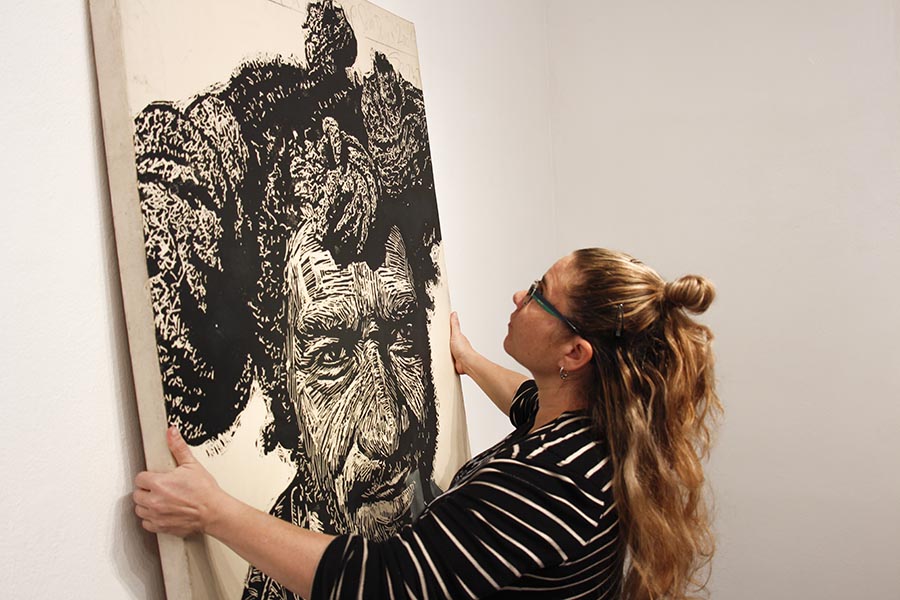 Sasha Reibstein has taken the reigns of curating the exhibitions shown at the Boehm Gallery.

Reibstein returned to Palomar in August as director of the Boehm Gallery after a year sabbatical traveling the world and making art. Here first stop was Berlin, Germany where she spent six weeks at Zentrum für Keramik as a resident artist with her family.

“My husband and three-year-old were able to go with me,” Reibstein said. “They left everything and went with me and they drank beer and ate sausage all day long as they wandered while I worked in my studio.”

She would then spend the following five to sixth months as a resident artist at The Clay Studio in Philadelphia along with a solo exhibition in Houston and guest lecturing opportunities in Boston. Reibstein attributes this time in her life as one of her best experiences to date not only for educational work but also as an artist.

“You need time to try new ideas when there’s not the pressure for everything to succeed, so it allowed me to be more experimental with the work I was making,” Reibstein said.

Lily Glass, chair of the college’s art department, said that the department voted in Reibstein as the gallery’s current director in the spring of 2015 before she had left on sabbatical. Reibstein had previously served as interim director in 2014 while the then director, Ingram Ober, was on sabbatical.

“I was honored that the faculty felt that I was able to do this,” Reibstein said. “I’ve been curating for quite a long time, so it felt very natural.”

Glass said the vote came about with the department’s desire to rotate the position every two years to bring their own personal ideas to the role.

“Everybody is going to bring their own experience and their own vision to the job,” Glass said. “I think when we have somebody with a fresh eye, bringing a different vision to the gallery that affects the students as much as anybody who gets to enjoy the show.”

Art Gallery Coordinator Kylee Mcdowell, whose been working at the gallery for more than 16 years, believes that the frequent change in directors is pretty quick but would bring diversity to the gallery.

Reibstein herself attributes her full-time faculty status as one of the challenges she faces as being the gallery director saying, “I am full-time faculty and so this is not a 40 hour a week job, this is in addition to my full-time teaching load.”

Reibstein has even contemplated to stop curating and focus on her studio work but says that she’s developed enough of a reputation that continually ask her to reprise the position.

“I’m not very good at saying no,” Reibstein added.

After receiving her master’s in fine arts from Massachusetts College of Art in 2005, Reibstein found herself at the college in the fall of 2006. Within a year at the college she would receive her first of four nominations for Palomar’s Distinguished Faculty Award in 2007, the last being in 2015 after a decade of teaching at Palomar.

“I never thought I would stay,” Reibstein said of being at the college. “I’m from Philadelphia and the idea that I live in California is very difficult for me.”

The draw of the college for her she says was the community that Palomar has created and that it displayed a commitment to the arts, in particular the 3D arts.

“That fact that there was a foundry, a glass blowing facility and ceramics facility. That’s a huge draw, that’s very unique,” Reibstein said. “What makes me stay is there’s an amazing community of artists here, working artists.”

Reibstein likens curating with interior design where the process of collecting and showcasing artists works on the white walls of the Boehm Gallery her installation, her art.

Reibstein said, “When I started curating one of the main reasons I started and enjoyed doing it was because I got to take the people who are my heroes, the peoples whose work I loved, and I got to introduce myself to them and develop a relationship with them and that’s not small.”

As the director, Reibstein is looking to build engagement with the gallery’s collection of art with students by archiving them into a database. From there she hopes to get students access to research the work that have stored. She’s also brainstorming on ways to get the community involved through collaborations with MiraCosta College and pop-up events with Stone Brewery.

“Have more people be aware that we exist, trying to figure out how to get people from San Diego to drive out to San Marcos that’s a big goal of mine,” Reibstein said. “I haven’t figured that one out yet but I’m working on it.”

Reibstein work, along with the artwork of the college’s art department faculty, can currently be seen at the Boehm Gallery’s annual faculty exhibition, “RIPE.” The show can be seen until Dec. 13. For more of Reibstein’s work visit sashakr.com.