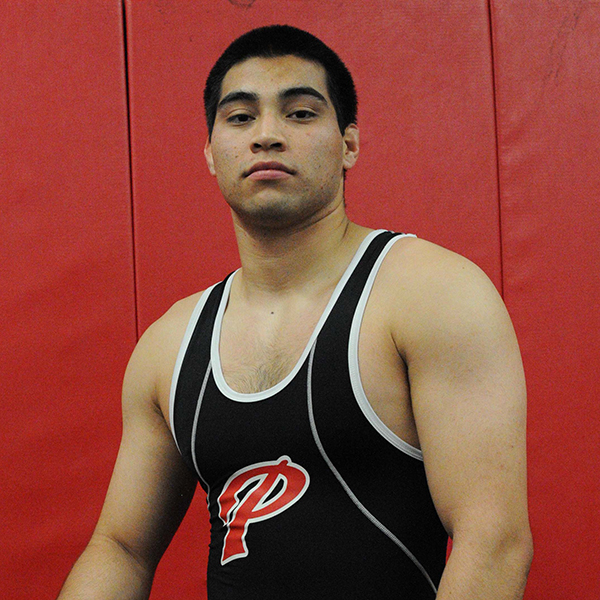 Comet wrestler, Alex Gomez, is continuing his season after coming off a second place finish at The Brawl at East L.A.

Gomez is in the 197-pound weight­class coming out of Ramona high school and is into his sophomore year in Comet red.

Gomez has built his skills off of last year and credits his coaches for helping his game out.

“This is because we have good coaches, head coach Brody Barrios is a good coach, and coach Mike has been helping me a lot,” Gomez said.

Gomez has learned different take­downs, pins, etc. One is the leg rid­ing move which he says is his biggest strength. Leg riding helps a wrestler make sure his opponent doesn’t escape from the bottom. Gomez added that his quickness and agility also plays a big factor in his victories.

Gomez, being from San Diego county, says he chose to wrestle for the Comets because Palomar College is one of the few community colleges in San Diego county that has a wrestling program.

The Comets head coach, Brody Barrios, has been the head coach for the wrestling team since the 2011 sea­son taking over for former Comet head coach, Byron Campbell, after his seven seasons at Palomar.

”He’s improved a lot since last year,” said Barrios. “I think if he puts it all to­gether and limits the mistakes he has a good chance at placing at the state tournament.”

Barrios has also said that Gomez is a tough competitor, but there has been a few instances where he gets out of posi­tion and costs his team some points.

Barrios has said that Gomez is a perfect example of a great teammate. He’s always on time, communicates well, he’s a great team player, and he’s always willing to do whatever it takes to make the team stronger.

“The last match I was in, I was in the finals at East Los Angeles wrestling the 5th seed The matches were close, there is little things i have to fix here and there,” Gomez said.

To improve in wrestling Gomez re­allywants to work on getting offbottom and taking the appropriate shots when he has too.

Gomez has high hopes of receiving a scholarship so he can continue his wrestling career after playing for the Comets.

Gomez wants to focus on getting his associates and bachelors degree in nursing in case he doesn’t receive that wrestling scholarship, but still wants to be involved in the sport as a coach for Ramona high school.

Gomez and the rest of the Comets wrestling team will be moving on from the East L.A. Tournament to the East L.A. College, Monterey Park matchup. Then onward to the Southern Califor­nia Regionals on Dec. 9-10 at Cuesta College, San Luis Obispo.