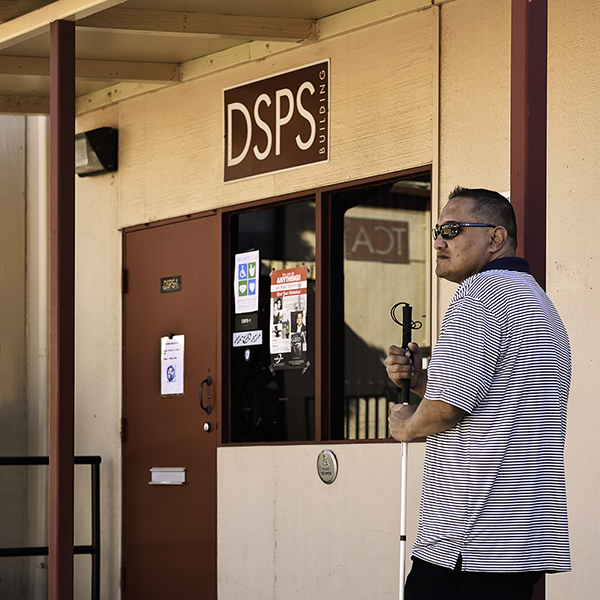 There’s more to student J. Castro than what meets the eye.

Formally known as Jose Castro, but called J by his friends and peers, he has been blind for the last 10 years of his life. Castro was a high school drop out, but still managed to land jobs at two different international companies eventually leading to roles within upper management. During that time, a car accident left him with permanent damage, including becoming blind. As a result, Castro decided to take “a year off from life.”

“Adjusting was hard but I believe in independence; but it comes at a great cost,” Castro said.

Castro’s daily schedule starts early. He wakes up at 2:30 a.m. almost everyday because he also has kidney problems. He then goes to the doctor at 4:30 a.m. and then comes to school by 9 a.m. where he is at Palomar until 4 p.m., sometimes longer. Castro has a private tutor he meets with at home and a tutor at Palomar to help him finish schooling. He only has the coming spring semester and then he is done with his studies at Palomar where he then plans to take a year off.

Castro is an older student and has gone to Palomar since 2012, originally taking one class to now being a full-time student. He is working toward a degree in multi cultural sciences.

The teachers here at Palomar adapt well to Castro’s blindness. He said, “I hold my own, sometimes I am more challenged, some teachers are a hit and miss.”

When Castro decided to go back to school he said he had to start from the very bottom and make his way up. Being a high school dropout he described he was terrible at reading and writing, but entering college he discovered he was actually a pretty good student.

During an interview a friend of his, Darlene, showed up to eat lunch and say hi to Castro. When asked if his other senses like hearing and smell are stronger he said he now has to rely more on those sense so he utilizes them more. He added that he could smell what Darlene was eating, a burger and fries. Castro was almost spot on while she was indeed eating fries, that predicted burger was really a chicken sandwich.

Castro said he enjoys doing ceramics and going to the gun range outside of school. He uses his visual recognition skills to shoot the targets.

“As a person with total blindness I find myself at odds with how society has changed,” Castro said. “Prior to my blindness I never really noticed how society can be cruel to those with disabilities. I hope that people would do their research to have a better understanding on disabilities rather than a predetermined opinion of others.”