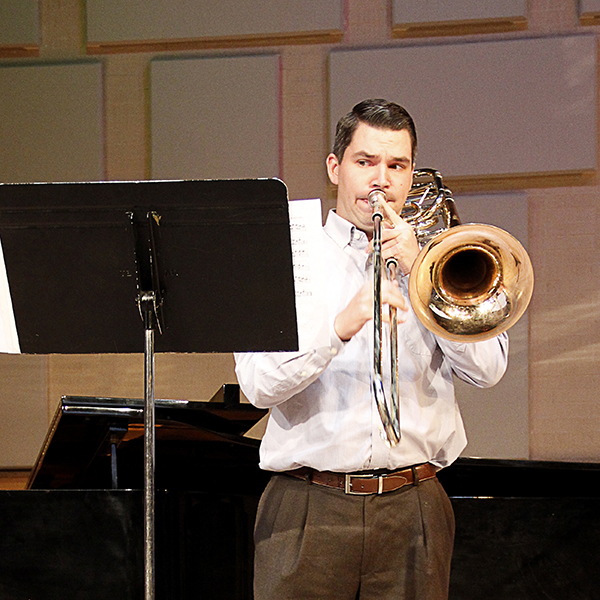 The spark of vibrations coming from the Sean Reusch trombone trio lit up Concert Hour on Nov. 3. The trio consisted of Sean Reusch, Brian O’Donnell and Steven Gray.

The performers are faculty at Palomar College as well as at other colleges around the county. During the performance students and staff listened as both Reusch and O’Donnell played the trombone while Gray played the piano.

O’Donnell and Reusch performed their first song together as an introduction, and both tenor and bass trombones welcomed the audience with musical tunes.

After the performance O’Donnell spoke about the admiration he has toward Reusch, and the influence he has had on his music career.

“[Reusch] and I play often… he was actually my teacher growing up,” said O’Donnell. “We are very good friends, we get to work together and respect each other a lot.”

Both Reusch and Gray performed six short classical songs with slight modern remixes. The final song was finished with a fast tempo, which lead the audience to cheer with excitement.

“I liked it.. hearing the music live instead of through a radio,” said Lucia Bautista, a 19-year-old math major in attendance. This was the first time Bautista attended concert hour and recommended others attend.

Reusch and O’Donnell next performed a romantic piece written by composer Gustav Mahler that was based off a poem Mahler wrote for his wife. Reusch described the melody as a very slow and beautiful piece that had a romantic touch.

Finishing up the concert, the trio performed an upbeat melody. After the song the audience cheered and applauded as the trio bowed before exiting the stage.