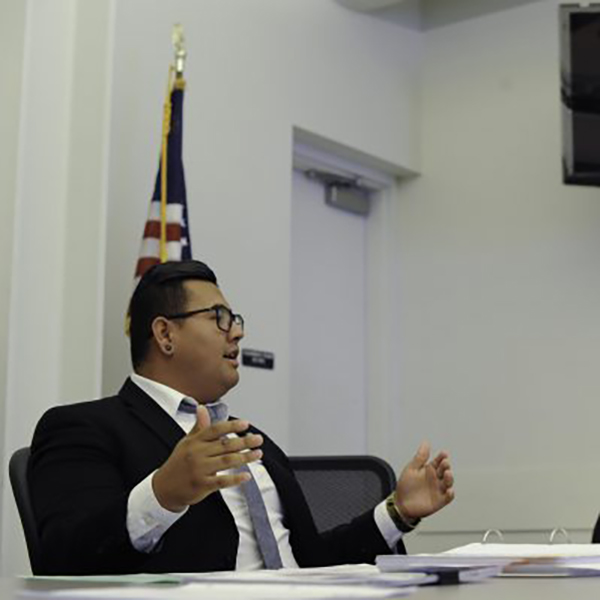 David Aguilar is the incumbent vice president of Palomar’s Associated Student Government and looks to make headway for student activism with his rolodex of words in his arsenal.

“I feel like having an array of vocabulary in your back pocket can be advantageous,” said Aguilar.

Aguilar said his main goal in his position is to reach out to students of all walks of life, inclining them to benefit from having an education. As a first-generation American and the first in his family to attend college, Aguilar wants to reach as many students as possible with the prospect of achieving a higher education.

“My parents didn’t attend college, so the rhetoric on how to attend college and what it meant was never there in my household,” Aguilar said.

From his own experiences entering college, Aguilar seeks out opportunities to work with first-generation students like those at the Escondido Campus. He promotes their desire to advance their education through the workshops he conducts on the campus.

As a sociology major, Aguilar says he loves engaging in civil discourse, conversations with the goal of mutual enlightenment. Without his ASG position Aguilar said he’d still be a student working and trying to graduate but he has sought more in his education through his involvement on campus.

“I want more, and I want to help others,” Aguilar said. “I want more.”

Aguilar’s desire to be on the front-line of helping Palomar students reach their full-potential is a strong motivating factor for him to take on ASG’s vice president position.

“I know that we can do great things with our partnership,” ASG President Malik Spence said.

According to Spence, Aguilar likes to please others, no matter who the person is.

“That definitely helps with developing these interpersonal relationships,” Spence said. “His big city words just gets people to be wowed by the size of his brain.”

Armando Contreras, a senator in ASG, described him as being “very charismatic, practical.” Contreras said helping people is what he sees as being one of Aguilar’s most noteworthy traits.

“He always tries to be cool. That’s one of the main reasons why I felt more of a desire to know him,” Contreras said.

According to Contreras, Aguilar is a student that would be known around the campus, with or without his political title. He enjoys making new friends, connections and people who may need his help Contreras said.

At the end of the day, Aguilar’s goals are firm in his mind. He said he believes education is power and the more we can educate through programs that can help under served students and members of society, the better. He keeps positive about his goals, and is determined to see them through.

“I have a chip on my shoulder, so I definitely am very motivated,” Aguilar said.