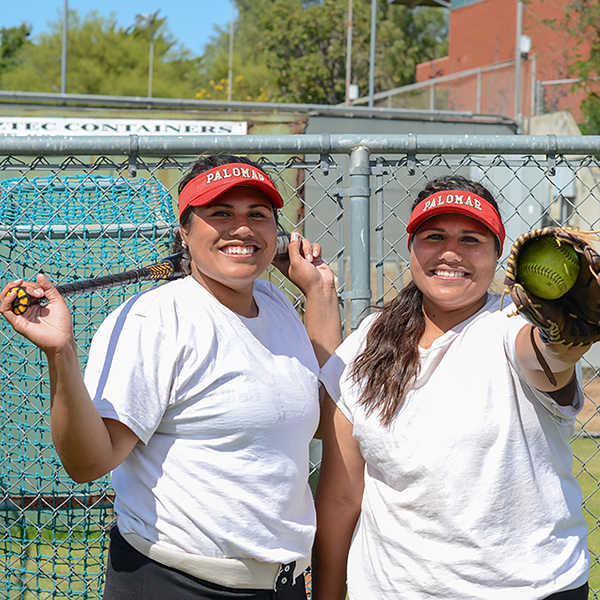 Softball a family matter for sisters

Palomar’s softball team continues to thrive with the help of two skilled sisters.

Trinity and Taylour Fa’asua, freshman infielders who were recruited from Oceanside High School, have become assets to Palomar’s successful team of women.

The girls, who have played soccer since childhood, have memories of friendly competition between the two of them.

“We played in the championship game against each other on our rec ball team; it was pretty fun because we shut her out,” said Taylour with a smile.

“That’s not true, we shut her out,” Trinity stated in reply.

Recruited in their senior year of high school, the girls were excited about the chance to play for Palomar.

“It feels great coming out of Oceanside High School. It’s not just a softball team; it feels great to be a part of such a talented team,” said Trinity when asked about how she feels about the team’s success.

Palomar continues to trump many teams in their conference with their skill and motivated attitude, which has led them to an overall score of 33 to 5 this season alone.

After winning conference the sisters were more motivated than ever to continue to move forward in their softball careers.

After ranking second in the southern california regional poll, Palomar softball team continues to keep their momentum while preparing for playoffs.

“We just want to work hard and stay focused,” said Trinity. “It’s all about self-control.”

“Our expectations at the beginning of the semester were just to grow stronger and get better in order to move on,” said Taylour. “We want to hopefully transfer out with good scholarships.”

Though the girls are unsure at the moment of where they would life to transfer too, they are glad they chose Palomar as their place to start their college careers.

“It was close to home which is great,” said Taylour. “The coaches here are the best; you can’t really get that anywhere else.

The Fa’asua sisters said they feel that they are not the only family on the team, but instead the team has become a family.

“Our relationship with the rest of the team is really great, we all get along and motivate each other,” said Trinity.

The girls hope to enjoy a playoff victory in the weeks to come, and continue to thrive both on and off the field.

For info on the Fa’asua sisters and their stats, visit http://www.cccaasports.org/sports/sball/2015-16/teams/palomar