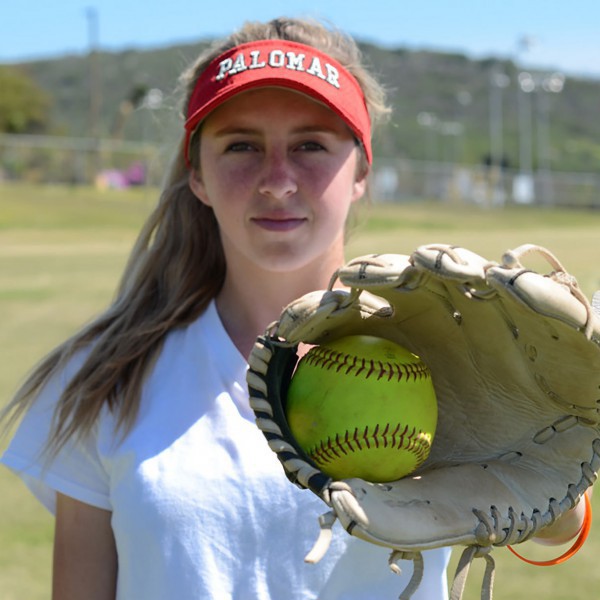 Hard work and competition pays off for star Comet pitcher

For softball pitcher Summer Evans, discovering her passion for softball was almost accidental.

The second-year Palomar student discovered softball because her best friend was playing.

“I started playing because my friend in middle school asked me to play. So then I started and then I just happened to be really good. I never played sports really before and I was kind of naturally was decent at it so then I got better over the years.”

In high school, her coach told her that she couldn’t be both a pitcher and a catcher because he didn’t want her to get hurt catching if she was a pitcher, so she picked pitching.

“I like to be in the middle of it (the game) and being part of every play,” Evans said.

Her record for this season is currently 21-4.

Evans doesn’t have anything lucky she takes with her to the games, but is superstitious about what she does throughout the game.

“Once I start playing I won’t change what I’m doing. After the first inning of pitching if I’m doing good, I won’t chew gum or do anything. If I’m eating seeds, I’ll eat seeds throughout the game,” Evans said.

When she has practice, Evans is usually out on the field 30 minutes to an hour before working on her pitches so that she can practice with her team later.

“There’s a very rare occasion where she has an off day, which is really nice because everyone has an off day but with Summer, even if she is a little bit off she still finds a way to get out,” said teammate Brooke Huddleson.

With practice five days a weeks and her school work, the second-season returning softball player is usually busy.

A typical day for Evans starts with her classes in the morning, followed by practice until about 3 p.m., ending with homework once she gets home. On game days, sometimes she won’t get home until 8 or 9 p.m.

“We do a lot of homework on the weekends and stuff. We don’t have a lot of free time. As like an athlete, it’s hard to balance everything…it’s worth it,” Evans said.

When she does have a little bit of free time, she likes to hangout with her friends because sometimes they feel like they never see her.

“My friends that aren’t athletes, they don’t really understand that I don’t have free time that much because all they do is work or go to school, so they have all the free time in the world,” she said.

Evans used to work at Banana Republic in Carmel Mountain, but recently quit her job because she didn’t have time for school, work, and softball.

“I just wanted to be able to relax a little bit more and not have to get out of practice and rush home and get ready and go to work until like 10 o’clock at night…and then I really don’t have any time,” she said.

Evans is trying to transfer this year. She is still undecided on where she wants to go or what she wants to major in, but is thinking about majoring in elementary education because she loves kids.

She will continue to play softball.

According to head coach Lacey Craft, Evans has been earning a lot of attention from 4-year schools that are interested in having her pitch for them in the future.

Last season, the team made it to and won first place at the state tournament. Evans hopes they can do the same this season because it was a great experience for her to see all of the team’s hard work pay off.

At that tournament, Evans received the award for Most Valuable Pitcher. Although she doesn’t like to talk about or brag about her accomplishments, she would consider that her biggest softball accomplishment.

Some of her teammates and coach like having her as part of the team because of her competitiveness.

Craft, values Evans because ” the biggest key to success at our level is pitching.”

” She is a real competitive player. She really likes to compete,” she said.

For the remainder of the season, she will continue to train and improve as much as she can.

“I don’t think I’m like amazing, but I work pretty hard and I think that’s what makes me standout,” she said.