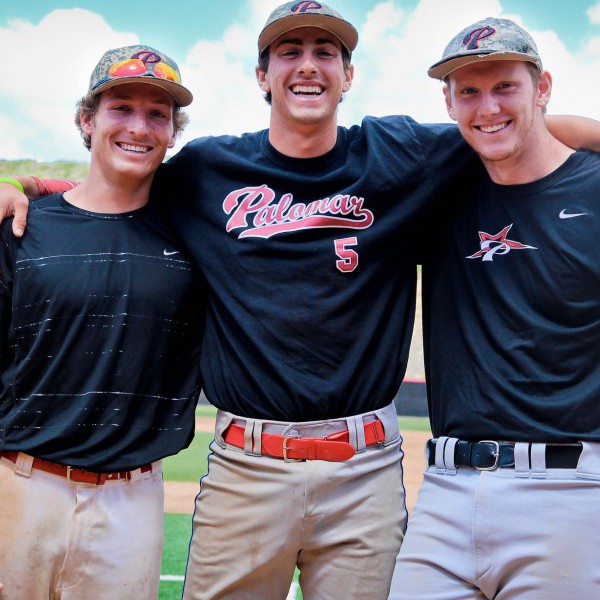 Academic Athletes excel on and off diamond

Three of Palomar’s star baseball players have been named to the All State Academic Team by the California Community College Baseball Coaches Association.

The trio — Joel Mitchell, Niko Holm and Chase Grant — collectively described the award they received as a reflection of their hard work.

According to its official website, the CCCBCA’s primary function is “to recognize the outstanding accomplishments of our players and coaches.” Last year there were 74 community college baseball players in the state of California who received the award, none of which were from Palomar.

Freshman first baseman Mitchell, who graduated from Ramona High School, is one of only five community college baseball players in the entire state of California to carry a perfect 4.0 grade-point average.

His long-term plan for the future is to enter the political science field and possibly become a lawyer. “He will probably be the President,” said Holm of his teammate.

If he wasn’t spending so much of his time out on the baseball field, it is likely that Mitchell would be participating in Palomar’s Associated Student Government. “The thing is, the kind of stuff you learn in student government are things like working together and being on the team…it’s very similar. So I made that choice. I think it was the right one.”

Sophomore outfielder Chase Grant follows with a grade-point average of 3.82. To make time for schoolwork and sports, he has had to sacrifice a lot of hours that otherwise would have been spent surfing.

Holm has also played soccer and basketball but has chosen to give those up for now and devote more of his time to baseball. Holm is undecided when it comes to his major but he’s looking into sports management as a possibility for his future.

The three of them attribute their academic and athletic success to their coaching staff, team, families, and teachers for supporting them and pushing them to do their best.

Mitchell said, “I think a lot of it is the individual, but you never get anywhere by yourself. There’s always a supportive team.  The baseball team is great for that. It’s kind of like a little community that will help you with whatever you need.”

Their academic advisor/associate coach Ben Adams and academic counselor Steve White help players make their schedule and keep them on track with regular grade checks. Mitchell added that it’s important for a student-athlete to enroll in the classes that will be more challenging for them during the off-season.

Holm said usually members of the team will take classes together and hold each other accountable.

When asked about how they would rank their list of priorities all of them immediately responded saying that family comes first.

“No one here would be where they are without their family,” said Holm. “I don’t think my dad has missed a single game in my college career. He was always my coach as a kid and always wanted to get the best out of me. I wouldn’t be anywhere near where I am today without him.”

Mitchell said, “Family was instrumental in me choosing Palomar. My grandfather (Jim Clayton) coached here before Bob Vetter did and my uncle and my father played here. Academically, the person who I strive to be is my mom. She has a master’s degree so ever since I was 5 or 6 years old I wanted to get a master’s.. degree or maybe two just to beat her. ”

“Family comes before baseball or academics. As a student athlete baseball and academics work hand in hand and I wouldn’t put one over the other. The self discipline I have learned from playing sports like baseball has helped me to get my work done,” said Grant.

Grant said his dad is his greatest motivator. “He just wants the best for me. He’s always there to make sure I’m doing the right thing and getting my stuff done.”

The players also get constructive criticism on the field from each other’s dads. For these three athletes, the friendship began years before they started playing for Palomar. Niko and Chase have played baseball together since they were about 9 years old.

Niko and Joel met playing baseball at Ramona High School. “He was a sophomore and he hit a home run to dead center. I had never seen a ball hit that far in my life,” said Holm.

These three Comets are just part of what is a collective unit with a focused drive towards the playoffs, starting in early May.