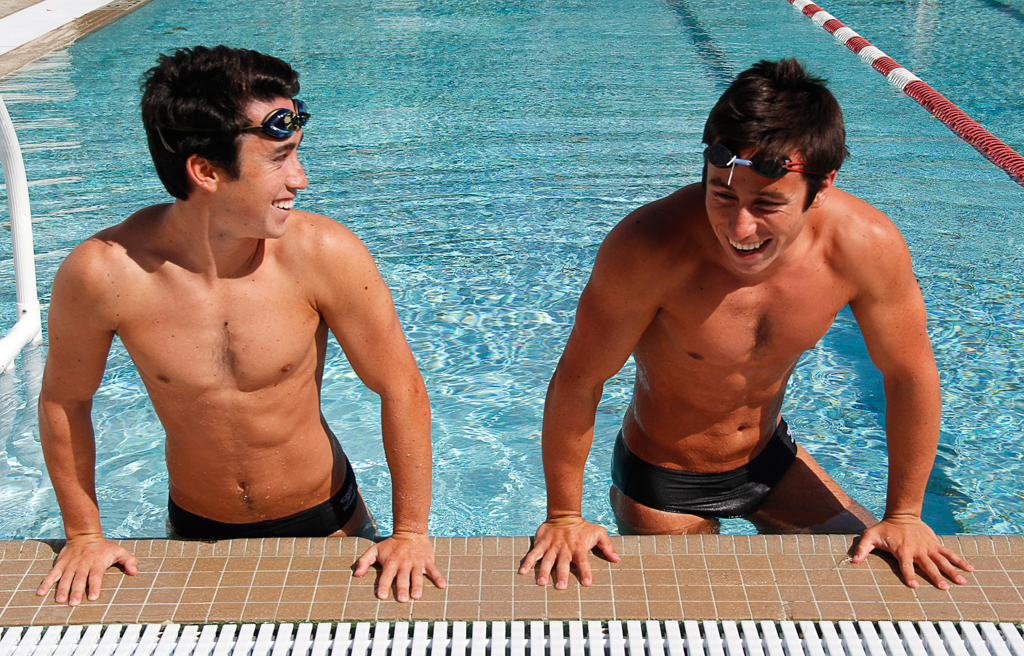 As 19-year-old Hayden McCauley emerged from the back of the training room, wrapped in a few bandages, the smell of chlorine and sunblock came with him.

As he walked up the hill toward the pool, he began to explain his experience being on Palomar’s swim team, as well as competing next to his older brother Ryan.

“It’s so much fun,” he said. “It definitely is an awesome experience where I can meet new people. Everyone is like a family here.”

McCauley has been swimming ever since he can remember, about 11 years. It is his second year swimming on Palomar’s team.

“It’s like a giant community,” Hayden explained, looking toward his friends, smiling. “One of the coolest parts is that people I used to compete against are now competing with me on the same team.”

Although he doesn’t want to do it as a career, Hayden said he will remember the experiences he had at Palomar forever.

“I used to swim here when I was younger. It’s really nostalgic for me.”

Jem McAdams, Palomar’s head swim coach who is going on his 24th season, explained how valuable Hayden and Ryan are to the team. “Hayden is definitely a team player. He had to swim a couple races that most people wouldn’t wan to do. He really steps up and take things for the team.”

“Ryan is incredible focused and goal oriented. He is definitely responsible. He is a hard worker that brings leadership to the team.”

He explained how coaching both brothers have been an honor. “It’s always about the athletes. We talk about swimming, but also about academic goals, setting up workouts that help the boys progress, and mature conversations. Its more than just a sport – its a relationship.”

McAdams continued to talk about how much the brothers enjoy being on the team together. He explained that Ryan even waited a year until Hayden graduated so that they were able to be on the swim team together.

“There is no animosity between them,” their coach said. “It is really unique. They wanted to swim together, and it shows. It sets a good tone when your best swimmers are your hardest workers.”

Hayden’s 21-year-old brother, Ryan, explained that it isn’t weird swimming with his brother at all. “We’ve been swimming together since kids. Palomar was a great choice for us because it allowed us to be able to swim together. It’s a really good team atmosphere here.”

Ryan explained that Palomar not only gave him an opportunity to swim, but it also helped him accomplish his academic goals. He was proud to announce that he has been accepted to Cal Poly, San Luis Obispo this fall to join the swimming team there.

“I couldn’t have done it without the support of my team. We definitely push each other.”