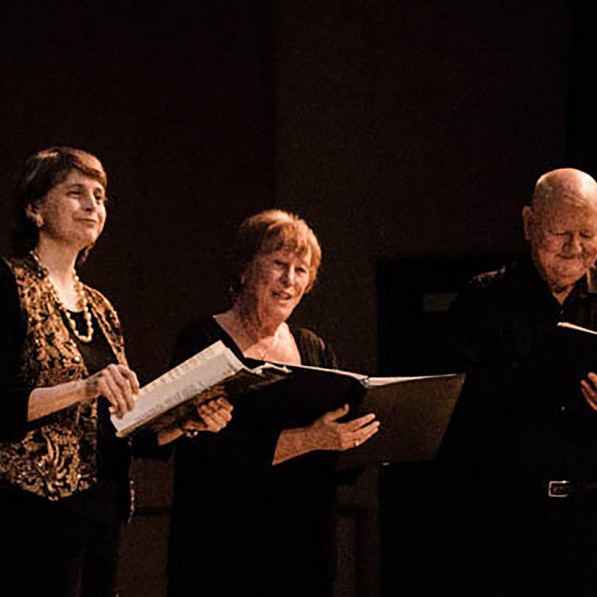 The Ensemble started over 40 years ago with Marti and Peeling who first sang with the La Jolla Renaissance Singers, then eventually formed into the current four-person group that it is today.

Their performance, title “The Folk Influence: Madrigals and Folk songs from the Renaissance and Beyond” consisted of 16 songs; four in French, three in Italian, four in English, and five in Swiss-German by 12 different composers ranging from the mid 1400s until the present.

“We [The Early Music Ensemble of San Diego] focus mainly on music from the Renaissance and some pieces from the Medieval era,” said Lawrence. “But I used to sing a lot of opera, and now I also perform with a group in La Jolla; we do a lot of modern music.”

The a cappella opened immediately with a piece by Claude Le Jeune; a French composer from the late Renaissance, titled “Revecy Venir du Printemps” which translates to “Here Again Comes the Spring.”

High octaves from both Marti and Lawrence backed by the low, bellowing voices of Larson and Peeling engulfed the acoustic atmosphere of the performance lab that was, in fact, a joyful welcoming of the spring season.

The second piece; titled “L’un asprete la glue” involved only three out the four singers, excluding the bass Larson and, although the song was missing one member, audience members could still hear an orchestra behind all three magnificent voices.

After a brief description of the first two pieces Lawthers described the third piece, composed by Orlando di Lasso titled “Mon Coeur de recommande a vous” and translated to “My heart is offered still to you” as an explanation of “how heartbroken someone can be when his love leaves him.”

This song was yet another sad musical gift at Concert Hour with a large distinction between the low and high octave singers that sounded like it would be heard at an opera, particularly during a scene where a main character either dies or is completely heartbroken.

The fourth piece, titled “Au joly jeu” opened with low, thunderous bellows from the two men (Peeling and Larson) with triumphant shouts and chants of the title.

“Au joly jeu” was a complete 180 degree turn from the previous sad madrigal that quickly changed the mood from dismal to jolly and left audience members grinning.

After the jolly presentation, the Ensemble continued to follow this theme into the Italian-spoken section of their performance with a song titled “Ecco la Primavera” that, according to Lawthers, means “Behold spring has come.”

Another welcoming to the bright season, this song featured only two of the members; Peeling and Larson, with the use of a tambourine to set the rhythm of another upbeat welcome.

My personal favorite song of the performance was the seventh piece titled “Chilchilchi” that Lawthers described as spoken in a Neapolitan dialect and “a discussion between ladies who were out a little too late, singing a little too loud about activities of the night before.”

During this song Larson (bass) sat out once again while the three other members sang a silly, quick-tongued and up beat Italian madrigal with a sudden interruption from Larson yelling in Italian for the three members to quiet down, adding even more humor to the catchy tune.

The communication seen between the Ensemble throughout the performance included nods and dips, eye contact and glares to change the pitch of each part; the Capella seemed to be having a conversation amongst themselves as well as with the audience .

This Concert Hour was a real joy to attend. The four singers were human polyphonic instruments and every line sang by each member possessed multiple variations and repetitions of each other that captivated audience members.