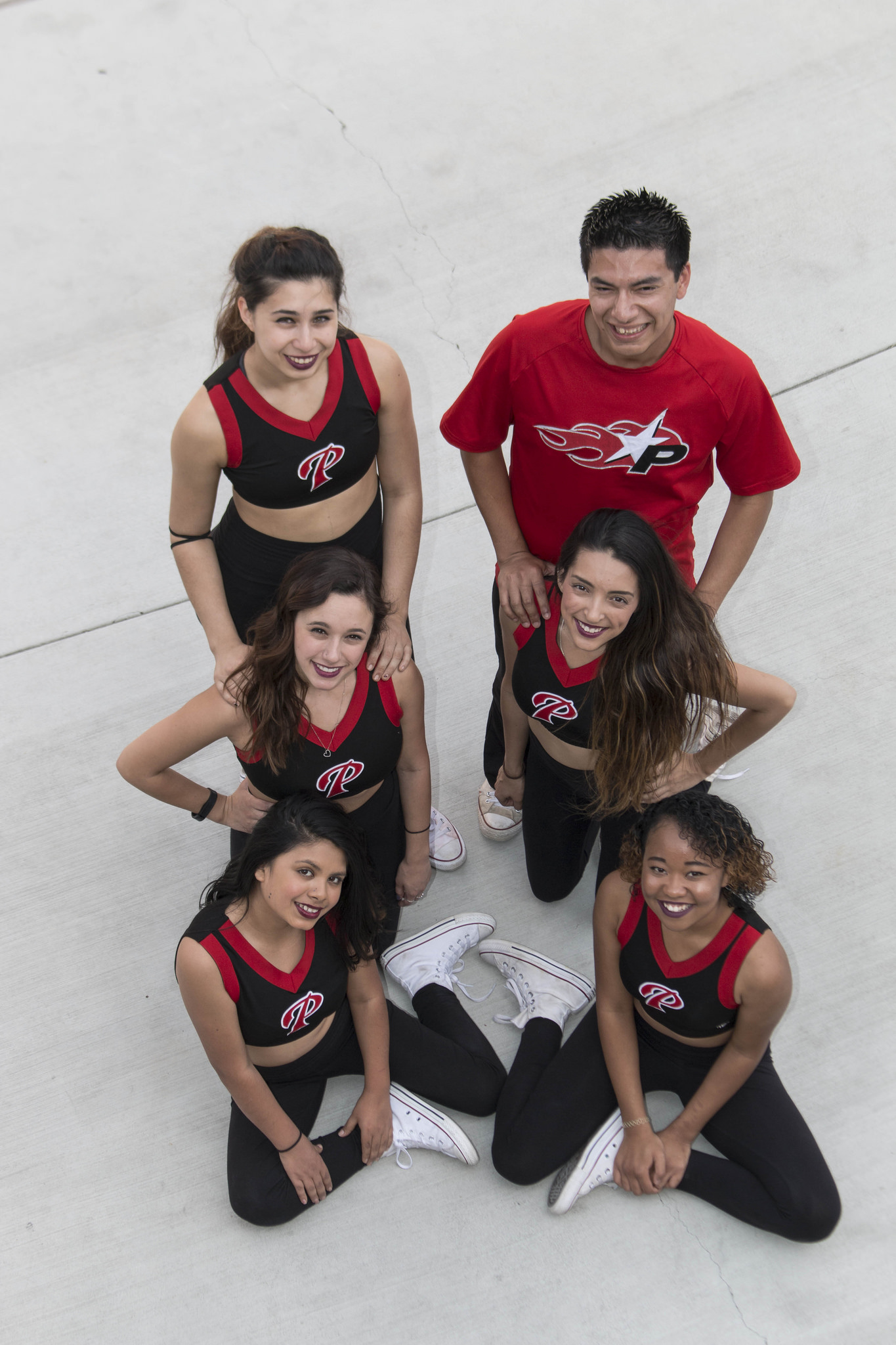 Dance, determination, and a new formation

“Where’s your Beyoncé?” dance coach Joanna Trailov shouts above the music, emitting smiles from the Palomar Dance team as they run through the routine for an upcoming basketball game’s half-time performance.

Encouragements like, “practice like you’re performing it” can be heard over the pulsing music, time counts, and the noisy clatter of the seven-member dance team. The team exudes an underlying wave of passion, dancing styles ranging from pom, hip-hop, lyrical, and jazz.

Trailov, recruited to help polish up the cheer team for competitions, immediately noticed there weren’t half-time performers, or a dance team for that matter, and embraced the new start up with a “let’s do this” attitude.

The team, complete with members all varying in levels of experience, auditioned and came together under one united passion: their love for rhythm. The group is considered a component of the cheer team as stated by Athletics Director Scott Cathcart and not an official dance team of the College. Although associated under cheer, the members hope to evolve into a club or be a separate entity of athletics in the future.

In order to become an official part of athletics, the team must meet established requirements of the NCAA eligibility qualification and be tied to a co-curricular program, like every other team on campus.

The motivation to succeed is evident with the team’s funding solution. Team member Alexis Manriquez set up a GoFundMe for warm ups, uniforms, dance camps, and events for the community with a goal of $1000 to be raised by the end of June.

Despite the funding challenge, the team works harder than ever to be present on campus and collaborates with their sponsor, Pizza Nova.

“Yes we’re [a] small [team] but we do have a lot to offer, if we were given the chance at first we wouldn’t have worked as hard as we do now,” said returning member Zoe Jones.

This team relies solely on determination and drive. Most of the members intend to work towards becoming Charger, Clipper, or Laker dancers. Ran on a create and teach program, the dancers make their own choreography each day and focus on a different area to strengthen.

The group will be attending a variety of events among the area including the Electric Run in Del Mar, Seaport Village Street Fair, and San Marcos Spring Festival to raise awareness and fundraise for the squad.

The Spring 2016 semester is the second semester the dance team has existed, dancing at the football games during the fall and more recently making an appearance to perform at basketball games.

“We do a lot of yelling and crowd involvement,” said team member Kristen Ochoa. “We want to be the people that you think of when you look at the faces cheering in the sidelines.”

That being said, the environment between the cheerleaders and the dance team strikes a healthy competition.

Trailov makes it clear that the teams aren’t competitors but a healthy rivalry.

“We want to make them work for it and we want them to make us work for it. We want the audience to know we’re going to have the fun banter between dance and cheer that’s going to get the crowd hyped up,” said Trailov.

The term captains doesn’t exist for this team. Instead, Trailov’s goal is to create a team of leaders. Team leaders are chosen at the end of every game who are responsible for guiding the group into the next game. The responsibilities the leader takes on include setting goals, offering encouragements, and strengthening the team’s skills.

Auditions for the team will begin in April where the team will be looking for people who love to perform in front of crowds, dance, and have fun. “We come with open arms, but be ready to work,” added Jones.

Incorporating life skills that the dancers can take on with them forever is a huge emphasis for Trailov.

“The one thing i’ve learned from about being a dancer my whole life is it’s just not about the two minutes you get out there, it’s a persona. It’s a characteristic trait that stays with you forever.”