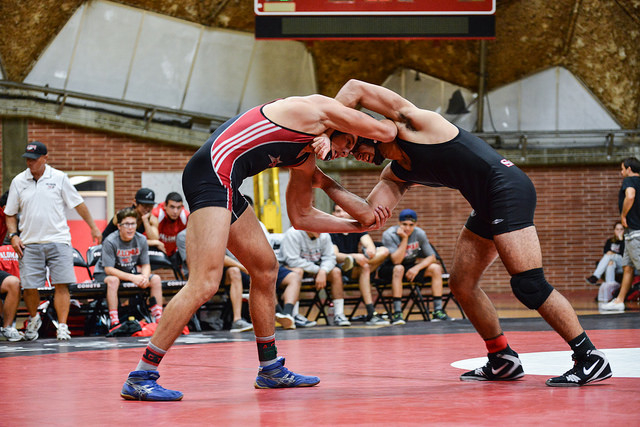 With five, state-ranked wrestlers, the Comets wrangled away a victory from Santa Ana College with a score of 32-9 at their first home meet of the season.

This wasn’t the first time that the Comets had gone up against Santa Ana College, their meeting on a previous Saturday had served as an introduction to what they were up against.

“We did significantly better against them than we did on Saturday,” Head Coach Brody Barrios said. “We’re seeing improvements in just a short amount of time, even the losses were positive for us.”

Kirk Kaliszewski (weight class 147) saw this as an opportunity to make up for a loss from the previous Saturday’s match.

“I just want to score early and get ahead early, so I can control the match,” Kaliszewski said. “It’s pretty important for me to get back there and beat this guy.”

Graves took his coach’s advice of keeping them “off our heads by creating motion and getting them out of their stance.”

“With him he wanted to be very stagnant and in the clench with me. He wrestles like a typical heavy weight, I had to just be active the whole time to set him up,” Graves said.

This being the first and one of the two home meets of the season, it held significant importance for the team.

“We only have two home matches, so we tried to get the whole San Diego wrestling community out to support,” Barrios said.

Part of this community are the families of the wrestlers, one such example is this being the first college match that Jake Schaeffer’s (weight class 125) parents could attend.

“It’s one of the only times my mom can come see me tonight,” Schaeffer said.

Jennifer Schaeffer, Jake’s mother as well as an English and drama teacher at Olympian High School, made the trek from Chula Vista to see her son compete.

She remarked on the impact that Jake’s career as an early wrestler has made on her life as a parent and the excitement that she had to see him wrestle at the college level.

“Some of the best moments of my life are watching him wrestle. I’m glad that I get to experience it again,” she said.